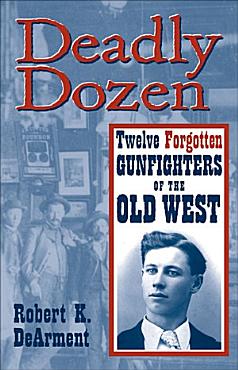 
Wyatt Earp, Billy the Kid, Doc Holliday—such are the legendary names that spring to mind when we think of the western gunfighter. But in the American West of the late nineteenth and early twentieth centuries, thousands of grassroots gunfighters straddled both sides of the law without hesitation. Deadly Dozen tells the story of twelve infamous gunfighters, feared in their own times but almost forgotten today. Now, noted historian Robert K. DeArment has compiled the stories of these obscure men. DeArment, a life-long student of law and lawlessness in the West, has combed court records, frontier newspapers, and other references to craft twelve complete biographical portraits. The combined stories of Deadly Dozen offer an intensive look into the lives of imposing figures who in their own ways shaped the legendary Old West. More than a collective biography of dangerous gunfighters, Deadly Dozen also functions as a social history of the gunfighter culture of the post-Civil War frontier West. As Walter Noble Burns did for Billy the Kid in 1926 and Stuart N. Lake for Wyatt Earp in 1931, DeArment—himself a talented writer—brings these figures from the Old West to life. John Bull, Pat Desmond, Mart Duggan, Milt Yarberry, Dan Tucker, George Goodell, Bill Standifer, Charley Perry, Barney Riggs, Dan Bogan, Dave Kemp, and Jeff Kidder are the twelve dangerous men that Robert K. DeArment studies in Deadly Dozen: Twelve Forgotten Gunfighters of the Old West.


A Fresh-Baked MysteryPhyllis Newsom and Sam Fletcher come out of retirement to works as substitute teachers as a favor for friends. That means getting up early, dealing with students and teachers, and helping out with extracurricular activities. But for Phyllis, stumbling over dead bodies is an extracurricular activity! When murder strikes at the school's Friday the Thirteenth dance, it's unlucky for the victim and for the student who's the prime suspect. Sam's granddaughter has a crush on the boy, and can't believe he's a killer. Neither can Phyllis. 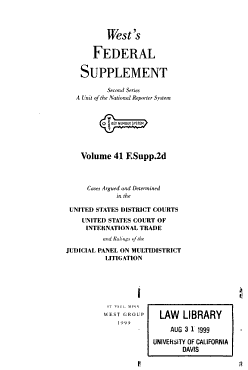 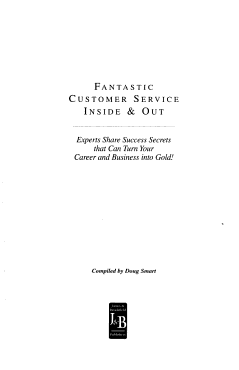 
The Shocking True Crime Stories of the 12 Worst Serial Killers in American History David Berkowitz: Known as the "Son of Sam," Berkowitz was a deeply disturbed young man who prowled the streets of New York dispensing death with his .44 caliber revolver. William Bonin: One of a trio of deadly psychopaths who trawled the freeways of Southern California during the late 70's and early 80's. Bonin was a depraved child killer who abducted, raped and tortured more than 20 teenaged boys. The Boston Strangler: Albert De Salvo took the fall but most experts agree that he was not the Strangler. So who was the real killer? And how did he get away with the series of brutal murders that so terrified the citizens of Boston? Ted Bundy: Charming, intelligent and lethal, Bundy is America's most notorious serial killer, a deadly fiend who cut a swathe of destruction across the country, raping, killing and committing necrophilia on his young victims. Dean Corll: Along with two willing teenaged accomplices, Corll orchestrated what was at the time the biggest murder spree in American history, raping torturing and killing at least 25 young boys. Jeffrey Dahmer: Hideously depraved killer who preyed on young homosexual men in Milwaukee, Wisconsin, cannibalizing them and conducting bizarre experiments on their bodies. Albert Fish: He looked like a frail old man, but Albert Fish was actually a psychotic child killer and torturer, with a taste for human flesh. John Wayne Gacy: Cold-hearted killer who raped, tortured and strangled at least 33 young men, burying their bodies in the crawlspace of his Chicago house. Randy Kraft: The least well known of California's three "Freeway Killers." And yet Kraft was both the most prolific and the most depraved, responsible for the torture killings of as many as 67 young men. Dennis Rader: Known as the "BTK Killer" (after his M.O.: Bind, Torture, Kill) Radar held the citizens of Wichita, Kansas in a state of fear for over 30 years, during which time he claimed 10 known victims. Richard Ramirez: A satanic burglar who went by the terrifying sobriquet, "The Night Stalker," Ramirez raped, battered, shot and stabbed his victims during a bloody reign of terror in 1980's Los Angeles. Gary Ridgeway: As the horrific "Green River Killer," Ridgeway engaged the Washington police in a deadly game of cat and mouse, claiming more that 60 victims over two decades. Scroll up to grab a copy of The Deadly Dozen: America's 12 Worst Serial Killers


A handy reference-tutorial that describes the various features and functions of the Microsoft Network explains how users can access and utilize the information they want. Original. (All Users). 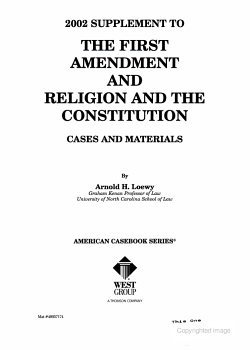 
The 1999-2000 term of the Supreme Court was an extraordinary one for speech and religion cases. The term produced cases dealing with prayer at high school football games, financing of religious education, expenditure of student fees, nude dancing, and picketing of abortion clinics, among others. Professor Loewy's supplement presents all of these cases. Consistent with the unique format of the texts, each of the cases in the supplement is lightly edited, with focused questions and notes to stimulate high-level classroom discussion.


A union list of serials commencing publication after Dec. 31, 1949. 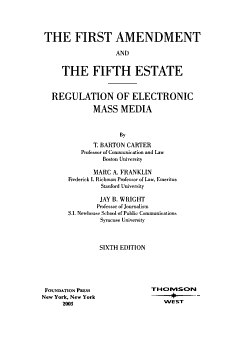 
This law school casebook examines the opinions and decisions of the overnmental bodies most directly responsible for the laws and regulations that apply to the electronic mass media-Congress, the FCC, and the courts. A part of the University Casebook Series, it includes selected cases designed to illustrate the development of a body of law on a particular subject. Text and explanatory materials designed for law study accompany the cases. 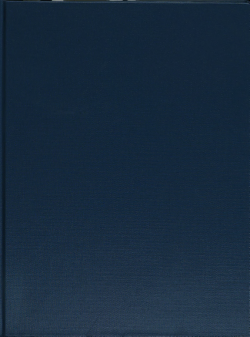 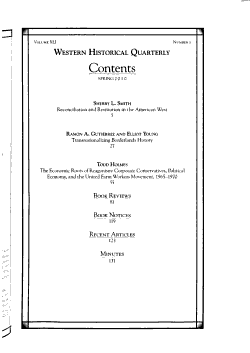 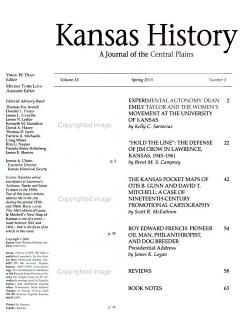