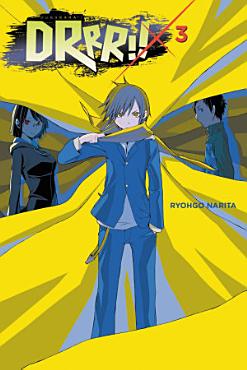 
"Could you kill someone? Working as an information broker in Shinjuku, just toying with all those people... But could you, Izaya Orihara, kill someone? Directly, by your own hand? Not stabbing someone with your knife just right to keep them from dying while you keep dodging the question, I mean. Well, whatever... In the end, you're the kind of guy who uses other people to do your dirty work. You're hilariously cowardly." Tokyo, Ikebukuro. Loads of baggage from the past are starting to turn up: A boss trying to escape the past. A pair of high school girls with consciences. A boy unaware of his friend's feelings for him. A man planning a takeover. A boy who uses information to manipulate others. And a headless rider on a pitch-black motorcycle--all headed on a collision course that will decide who will overcome their past and who will become nothing more than a memory... 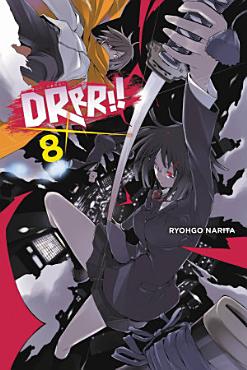 
(Volume 7) "I'm not doing anything. All the Dollars did that together..." The holiday isn't over yet. The day after Izaya was stabbed, the scars of the recent incident are still fresh on the city. A pair of classmates wander the town together. A sister keeps an eye on the girl hanging around her brother. A girl tries to strengthen herself to kill the strongest man in town. A set of mischievous twins don't bother to care about their brother. A Russian woman mourns her future. A yakuza clings to his past. A doctor who travels to enjoy his holiday with a recently-relaxed headless dullahan... Ikebukuro is going to be busy! 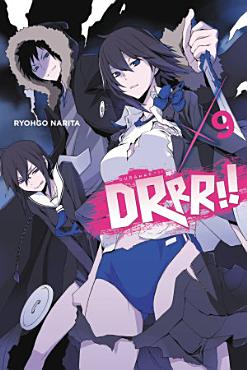 
A twisted love for humanity... Izaya Orihara is used to getting his hands dirty, manipulating others for his so-called "love." While working with the Awakusu-kai to locate a group distributing drugs, the information broker finds himself trapped in a dark room with a burlap sack over his head. As with all things Izaya, on of several reasons for his current predicament can be traced to his youth. Meanwhile, Shinra opens up to Celty about his time in middle school with Izaya and the boy's connection to his car. Through all the chaos, does Izaya have everything under control in Ikebukuro? 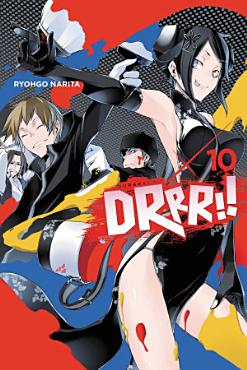 
Ikebukuro, Tokyo. The Dollars and anyone associated with them have been disappearing one after the other. Is it because those who once called themselves comrades have decided to strike off on their own? Maybe it's because of a plot concocted by the adults of the Awakusu Group, the black market dealers, and the information brokers? 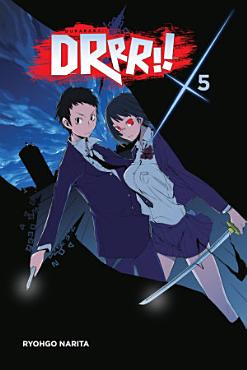 
Ikebukuro, Tokyo. All kinds of people are showing up to settle their scores with Izaya Orihara the information broker. A pair of foreigners who specialize in odd jobs. A runaway girl still looking for her Shizuo. A fellow dressed like a bartender who looks like he's had better days. A womanizer set on getting his revenge against the Dollars. An underground doctor waiting for someone to come home. A class representative with a clueless classmate pal and a target on his back. And a headless rider who can't help getting sucked into trouble. Question is, is this spring break something special, or is this just business as usual in Ikebukuro?


"I'm not doing anything. All the Dollars did that together..." The holiday isn't over yet. The day after Izaya was stabbed, the scars of the recent incident are still fresh in the city. An eccentric couple wanders the town together as a sister keeps an eye on the girl hanging around her brother. Two women--one a child, one an adult--pursue the meaning of strength, focusing their attention on the strongest man in town. A set of mischievous twins don't bother to care about their brother. A yakuza clings to his past. Meanwhile, an underground doctor just wants to enjoy a vacation with a recently relaxed headless dullahan... Ikebukuro is going to be busy!


After being framed by Izaya and forced to become fugitive on the run, Shizuo. Forced to rethink his position and circumstances, Mikado. Only now realizing the predicaments of his friends, Masaomi. Unaware of everything going on as she flees her house, Anri. Events going far beyond anything she could have imagined, Akane. Unable to conceal her excitement at coming into contact with the Black Rider, a girl. Continuing to wait anxiously at home, Shinra. Scheming so everything goes his way, Aoba. Working towards enacting his revenge on the Dollars, Chikage. And lastly, the person who will save the Headless Rider is--Ikebukuro is warping again today in the next installment of Durarara!!


This book consists of articles from Wikia or other free sources online. Pages: 68. Chapters: Akabayashi, Akane Awakusu, Anri Sonohara, Aoba Kuronuma, Aozaki, Celty Sturluson, Dennis, Dougen Awakusu, Earthworm, Emilia Kishitani, Erika Karisawa, Hajime Shishizaki, Haruna Niekawa, Hiroshi, Horada, Igor, Izaya Orihara, Kasuka Heiwajima, Kazamoto, Kazutano, Kine, Kinnosuke Kuzuhara, Kururi Orihara, Kyohei Kadota, Mairu Orihara, Masaomi Kida, Max Sandshield, Mika Harima, Mikado Ry gamine, Mikage Sharaku, Mikiya Awakusu, Namie Yagiri, Ran Izumii, Rio Kamichika, Rokujo Chikage, Ruri Hijiribe, Ryo Takiguchi, Saburo Togusa, Saika, Saki Mikajima, Seiji Yagiri, Shiki, Shingen Kishitani, Shinra Kishitani, Shiri, Shizuo Heiwajima, Shooter, Shuji Niekawa, Simon Brezhnev, Slon, Takashi Nasujima, Tom Tanaka, Vorona, Walker Yumasaki, Yadogiri Jinnai. Excerpt: Physically speaking, Akabayashi is of an average build but has remarkable strength for someone his age. His most distinguishing feature is the scar on his right eye. He is usually seen wearing a black suit with a red undershirt and also wears colored sunglasses. He also carries an intricately carved, handcrafted cane which most people find gaudy. In his younger days, Akabayashi was reckless, hotheaded, and completely ruthless. He was always eager to fight and would usually leave his opponents in a bloody mess. As the years went on he seems to have mellowed with age and is much more relaxed and laid back. Many of his older aquantances find this as a big shock and wonder what could have changed him so quickly. He has a soft spot for kids and has strong convictions against drug dealing. He is also adept at keeping up with pop culture and adapting to new technologies unlike his partner Aozaki. Akabayashi's sudden change in personality has also sparked some distrust amongst his colleagues, most notabley Shiki . Shiki believes that akabayashi is hiding something but he isn't sure what. Before joining the awakusu, Akabayashi was...


Can a monster protect anyone?Ikebukuro is falling apart. Kujiragi uses Saika to subjugate Shinra, and when the Headless Rider witnesses this, the dullahan becomes a true monster. Masaomi's old enemy Ran Izumii reappears and attacks him. Meanwhile, Saki visits Anri to find out how she feels about Masaomi. Kadota disappears from his hospital room, Celty's head is in someone else's hands, and Shizuo finally comes face-to-face with the one he hates the most...In the midst of all the chaos, what kind of power has Mikado seized-and how does he intend to use it?


"Do you enjoy being the Black Rider who's been spotted all over Ikebukuro over the past few years now? Why is it that you're riding such a dangerous bike all over the place? Are you aware that you're violating the law?!" Ikebukuro, Tokyo. A place full of fires waiting to be lit and plenty of people ready to light a match: Twins who are the perfect opposite of each other. An idol who's nothing like her older brother. A girl with a crush on her senior in the Dollars. And a headless rider with a bounty on her...uh, head. Keeping the peace is probably not gonna happen.