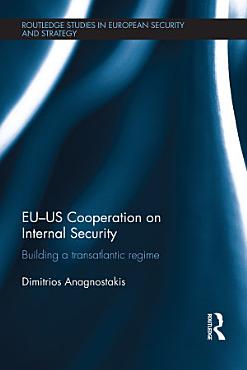 
This book analyses the cooperation between the European Union and the United States on internal security and counter-terrorism since the 9/11 terrorist attacks. In particular, four areas of cooperation are examined: customs and supply chain security; judicial cooperation (the mutual legal assistance and extradition agreements); law enforcement cooperation (the Europol-US agreements); and the EU-US agreements for the sharing of air passengers’ data (PNR agreements). These cases are analysed through a conceptual framework based on the theories of international regimes, with the data being drawn from an extensive documentary analysis of media sources collected through the 'Nexis' database, official documents, and from 13 semi-structured elite interviews with US and EU officials. The book argues that the EU and the US have established a transatlantic internal security regime based on shared principles, norms, rules, and interests. While at the beginning of this process the EU had a more reactive and passive stance at the later stages both the EU and the US were active in shaping the transatlantic political agenda and negotiations. The book demonstrates how the EU has had a much more proactive role in its relations with the US than has often been assumed in the current literature. This book will be of much interest to students of EU policy, foreign policy, international security and IR in general. 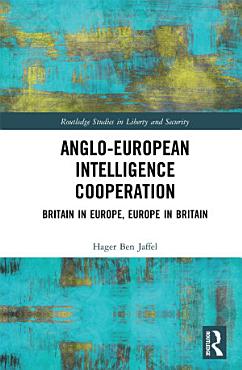 
This book investigates everyday practices of intelligence cooperation in anti-terrorism matters, with a specific focus on the relationship between Europe and Britain. The volume examines the effective involvement of British anti-terrorism efforts in European cooperation arrangements, which until now have been overshadowed by the UK-US ‘special relationship’ and by political debates that overstate the divide between Britain and continental Europe. In arguing that British intelligence has always had a European dimension, it provides a distinct perspective to the study of intelligence cooperation and the role of British intelligence therein. Mobilizing a ‘field theory’ approach, the book provides an original contribution to the understanding of intelligence cooperation by investigating everyday bureaucratic practices of ‘ground-level’ security professionals and police forces, embedded in a European ‘field’ structured around the exchange of anti-terror intelligence. It also accounts for the drivers behind cooperation by using ‘field analysis,’ which explains the trajectory and positioning of actors according to their ‘capitals’ rather than necessities dictated by threats or state decisions. This book will be of much interest to students of Security Studies, International Political Sociology, Intelligence Studies, and International Relations in general. 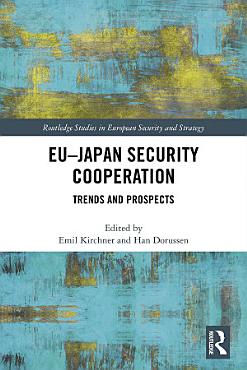 
This book assesses EU-Japan security relations, examining how they have developed in individual security sectors and how they could be affected by international developments. The conclusions of the Economic Partnership Agreement and the Strategic Partnership Agreement in 2017 demonstrate the steady growth in EU-Japan political relations. Since the 1990s, dialogues between the EU and Japan have benefitted from extensive trade and investment ties and shared liberal values. Based on collaborative research by European and Japanese scholars, this book provides an in-depth, systematic and comparative analysis of the extent to which the EU and Japan have achieved concrete actions in the pursuance of security cooperation across a range of key areas such as nuclear proliferation, regional security, international terrorism, and energy and climate security. Further, it seeks to explain why some security sectors (such as economic and cybersecurity) have resulted in more extensive EU-Japan cooperation, while others lag behind (such as military and regional security). Common declarations and actions of shared interest and concerns have often led to only modest levels of security collaboration, and the book highlights factors that may be seen as intervening between intention and action, such as the role of external actors, for instance China and the US, and the constraints of internal EU and domestic Japanese politics. This book will be of much interest to students of European security, Japanese politics, diplomacy studies and international relations. 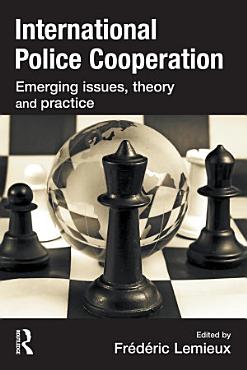 
The globalization of threats and the complexity of international security issues represents a greater challenge for international policing in (re)shaping inter-agency interaction, and makes effective international police cooperation more necessary than ever before. This book sets out to analyse the key emerging issues and theory and practice of international police cooperation. Paying special attention to the factors that have contributed to the effective working of police cooperation in practice and the problems that are encountered, this book brings together original research that examines opportunities and initiatives undertaken by agencies (practices and processes introduced) as well as the impact of external legal, political, and economical pressures. Contributors explore emerging initiatives and new challenges in several contexts at both national and international levels. They adopt a diversity of approaches and theoretical frameworks to reach a broader understanding of current and future issues in police cooperation. Forms of police cooperation and trends in crime control are examined, drawing upon the following disciplines: criminology, ethics, organizational science, political science, and sociology. 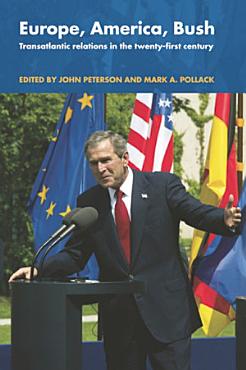 
Europe, America, Bush is the first study of underlying elements of continuity in the transatlantic relationship, as well as new and powerful forces for change. It offers a definitive assessment of whether, and how much, the election of George W. Bush, the events of 11 September, and conflict over Iraq mark genuine and lasting change in transatlantic relations. American and European experts assess transatlantic relations on matters of foreign and security policy, economic diplomacy, justice and internal security cooperation, environmental policy and relations with Russia, the Balkans and the Middle East. This is essential reading for all students with an interest in this key relationship in world affairs. 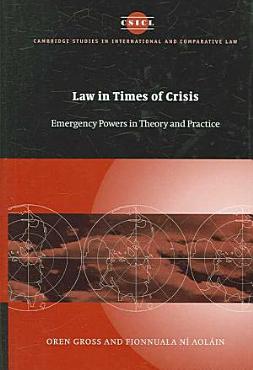 
The terrorist attacks of September 11, 2001, and the ensuing 'war on terror' have focused attention on issues that have previously lurked in a dark corner at the edge of the legal universe. This book presents a systematic and comprehensive attempt by legal scholars to conceptualize the theory of emergency powers, combining post-September 11 developments with more general theoretical, historical and comparative perspectives. The authors examine the interface between law and violent crises through history and across jurisdictions, bringing together insights gleaned from the Roman republic and Jewish law through to the initial responses to the July 2005 attacks in London. Three models of emergency powers are used to offer a conceptualization of emergency regimes, giving a coherent insight into law's interface with and regulation of crisis and a distinctive means to evaluate the legal options open to states for dealing with crises. 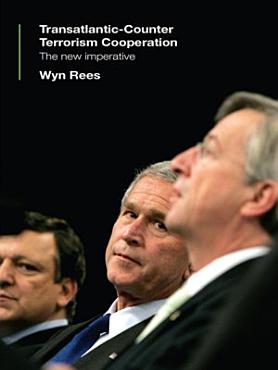 
An incisive new analysis of transatlantic security cooperation, probing the roots as well as the future directions of this key relationship in world affairs. Since the 1990s, this cooperation has expanded from traditional military security issues into countering terrorism, international organized crime and drug trafficking. This has injected new impetus into transatlantic relations to work together on matters such as intelligence sharing and law enforcement. The events of September 11th 2001 have forced these new patterns of cooperation to the forefront of transatlantic relations. While progress has been made, developing this area of cooperation has been more difficult than expected and this book examines the reasons why. The author argues that many of the difficulties are due to different approaches on either side of the Atlantic and the absence of a dedicated transatlantic security forum in which these issues could be pursued. Furthermore, European nations have been preoccupied with the building of the European Union and have been both reluctant and unable to enter into special patterns of cooperation with the US. 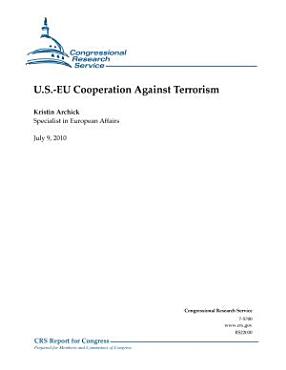 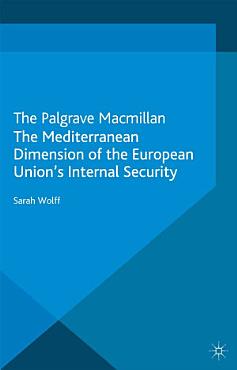 
EU internal security concerns such as migration, police and judicial cooperation are today part of EU foreign policy. This book shows how those concerns dominate the EU agenda towards Mediterranean countries. Adopting a rational-choice institutionalist approach, it explores EU policy and the strategic choices made after the 2011 Arab revolts. 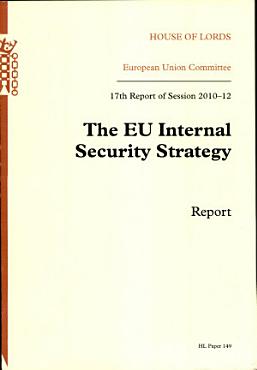 
Following the Treaty of Lisbon, The European Council has been given the power to adopt and implement an internal security strategy. it did so in March 2010, and this was followed in November by a Commission communication setting out the priorities, and how to implement them. The communication sets out five steps towards a more secure Europe: The disruption of international crime networks, The prevention of terrorism, security in cyberspace, improved border management, and increased resilience to crises and disasters. Of these cyber-security is a comparative newcomer and it is now clear that it can lead to massive disruption of state infrastructure, and can be used for espionage, terrorism, even war. As such, much of the evidence received concerned the role which the EU might play in fighting cyber-attacks. The Commission's main proposal is to set up a new Cybercrime Centre. This might be no more than a talking shop, but it could become a useful tool for investigating and analysing past attacks, improving law enforcement and preventing future attacks. Much will depend on whether it is given adequate resources. The Committee looked at the implementation of the strategy and at the way in which it overlaps with national and international strategies, In the hope that they can be mutually supportive. The Council has a new committee, which, under the Treaties, has the duty of coordinating all the work on internal security. Unless it does so effectively very little can be achieved; if it properly fulfils its mandate, The EU may play a valuable role in protecting the security of its citizens. 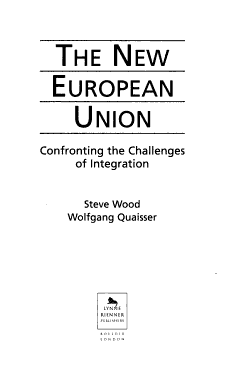 
This concise but wide-ranging work explores the major political, economic, and strategic challenges confronting the European Union in the context of a rapidly changing geopolitical environment.Steve Wood and Wolfgang Quaisser consider the actors and issues at the center of current developments in the integration process. Beginning with some basic conceptual questions - for example, what is Europe? - they focus on the Union's increasingly complex politics and economy. Their discussion ranges from political economy, to policy reform and institutional change, to the arena of international relations. They also address the more intangible factors of European identity and common political will.An intriguing set of possible future scenarios concludes the authors' up-to-date examination of the EU after enlargement. 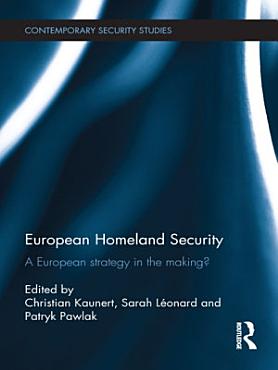 
This book examines the processes and factors shaping the development of homeland security policies in the European Union (EU), within the wider context of European integration. The EU functions in a complex security environment, with perceived security threats from Islamist terrorists, migration and border security issues, and environmental problems. In order to deal with these, the EU has undertaken a number of actions, including the adoption of the European Security Strategy in 2003, the Information Management Strategy of 2009, and the Internal Security Strategy of 2010. However, despite such efforts to achieve a more concerted European action in the field of security, there are still many questions to be answered about whether the European approach is really a strategic one. European Homeland Security addresses two major debates in relation to the development of homeland security in Europe. First, it reflects on the absence of ‘homeland security’ in European political debate and its potential consequences. Second, it examines the significant policy developments in the EU that suggest the influence of homeland security ideas, notably through policy transfer from the United States. The book will be of great interest to students of European security and EU politics, terrorism and counter-terrorism, security studies and IR.