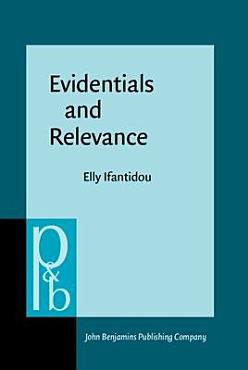 
This book uses Sperber and Wilson s Relevance Theory to show how evidential expressions can be analysed in a unified semantic/pragmatic framework. The first part surveys general linguistic work on evidentials, presents speech-act theory and examines Grice s theory of meaning and communication with emphasis on three main issues: for linguistically encoded evidentials, are they truth-conditional or non-truth-conditional, and do they contribute to explicit or implicit communication? For pragmatically inferred evidentials, is there a pragmatic framework in which they can be adequately accounted for? The second part examines those assumptions of Relevance theory that bear on the study of evidentials, offers an account of pragmatically inferred evidentials and introduces three distinctions relevant to the issues discussed in this book: between explicit and implicit communication, truth-conditional and non-truth-conditional meaning, and conceptual and procedural meaning. These distinctions are applied to a variety of linguistically encoded evidentials, including sentence adverbials, parenthetical constructions and hearsay particles. This book offers convincing evidence that not all evidentials behave similarly with respect to the above distinctions and offers an explanation for why this is so. 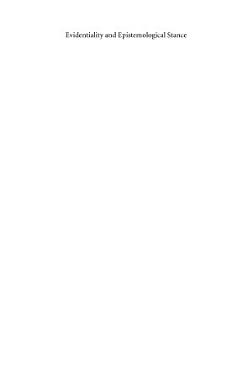 
This book explores the discourse pragmatics of reportive evidentiality in Macedonian, Japanese and English through an empirical study of evidential strategies in narrative retelling. The patterns of evidential use (and non-use) found in these languages are attributed to contextual, cultural and grammatical factors that motivate the adoption of an ‘epistemological stance’ — a concept that owes much to recent trends in Cognitive Linguistics. The patterns of evidential strategies found in the three languages provide a fine illustration of the balancing act between speakers’ expressions of their own subjectivity, their motivations to tell a coherent and exciting story, and their motivations to be faithful retellers of someone elses’ story. These pressures are further complicated by the grammatical and pragmatic conventions that are particular to each language. Evidentiality and Epistemological Stance: narrative retelling will appeal to those interested in evidentiality, grammar and pragmatics, cross-linguistics discourse analysis, linguistic subjectivity and narrative. 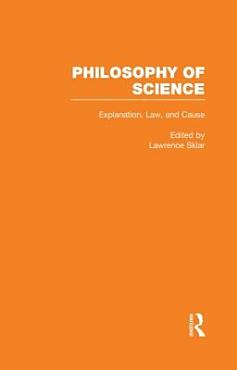 
About the Series Contemporary philosophy of science combines a general study from a philosophical perspective of the methods of science, with an inquiry, again from the philosophical point of view, into foundational issues that arise in the various special sciences. Methodological philosophy of science has deep connections with issues at the center of pure philosophy. It makes use of important results, for example, in traditional epistemology, metaphysics and the philosophy of language. It also connects in various ways with other disciplines such as the history and sociology of the sciences, with pure logic, and with such branches of mathematics as probability theory. These volumes are, for the most part, devoted to readings in the methodological aspects of the philosophy of science. One volume, however, takes up the philosophical issues in the foundations of a particularly important special science, that is the issues in the foundations of theories of contemporary physics. The methodological volumes cover a number of crucial general problem areas. The first volume takes up issues in the nature of scientific explanation, and the related issues of the nature of scientific law and of the casual relation among events. The second volume explores issues in the nature and structure of scientific theories. The third volume collects inquiries into the nature of scientific change, as one theory is replaced by another. Volume four is devoted to readings concerning the nature of probability and the nature and justification of inductive reasoning in science. The following volume continues the exploration of the issue of confirming and rejecting theories with a series of readingsdevoted to Bayesian methodologies in science and to the exploration of non-inductive strategies for rationalizing belief. Finally, volume six explores three major problem areas in the foundation of physics: the nature and rationale for physical theories of space and time; the interpretive problems arising out of the quantum theory; and some puzzles arising out of statistical mechanical theories of physics. The readings are selected and arranged to provide the user with systematic access to the most important contemporary themes in methodological philosophy of science and in philosophy of physics. The selections include many recent contributions to the field, as well as papers and extracts from books and journals otherwise not easily available. 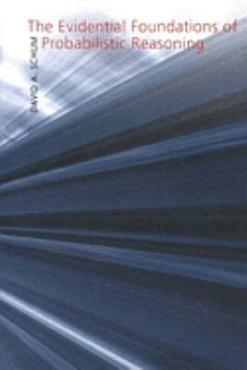 
In this work Schum develops a general theory of evidence as it is understood and applied across a broad range of disciplines and practical undertakings. He include insights from law, philosophy, logic, probability, semiotics, artificial intelligence, psychology and history. 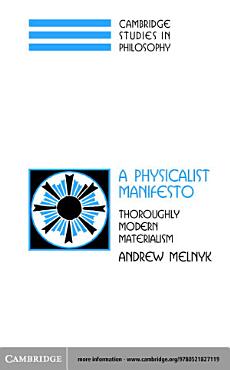 
A Physicalist Manifesto is a full treatment of the comprehensive physicalist view that, in some important sense, everything is physical. Andrew Melnyk argues that the view is best formulated by appeal to a carefully worked-out notion of realization, rather than supervenience; that, so formulated, physicalism must be importantly reductionist; that it need not repudiate causal and explanatory claims framed in non-physical language; and that it has the a posteriori epistemic status of a broad-scope scientific hypothesis. Two concluding chapters argue in detail that contemporary science provides no significant empirical evidence against physicalism and some considerable evidence for it. Written in a brisk, candid and exceptionally clear style, this 2003 book should appeal to professionals and students in philosophy of mind, metaphysics and philosophy of science. 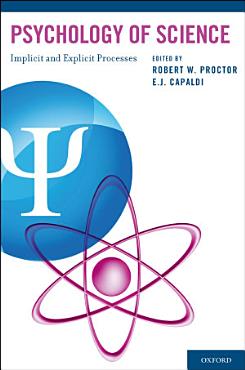 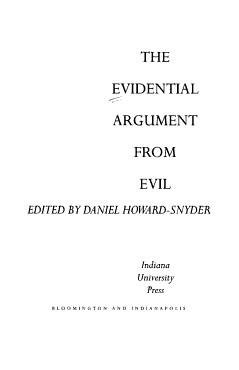 
Philosophers and theologians debate whether evidence of evil undermines belief in God. 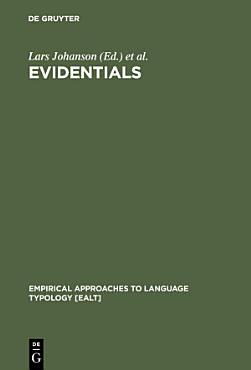 
The series is a platform for contributions of all kinds to this rapidly developing field. General problems are studied from the perspective of individual languages, language families, language groups, or language samples. Conclusions are the result of a deepened study of empirical data. Special emphasis is given to little-known languages, whose analysis may shed new light on long-standing problems in general linguistics. 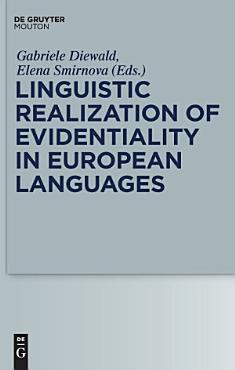 
The book offers the first collection of papers which explicitly deal with the linguistic realization of evidentiality in European languages. The contributions summarize relevant previous research and develop new perspectives on the view of evidentiality. The scope of the papers ranges from broad overviews on areal and typological issues to in-depth studies of evidential expressions in particular languages. 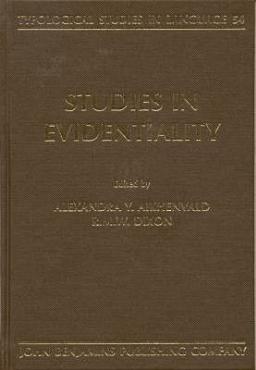 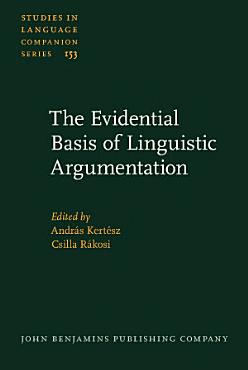 
Currently, one of the methodological debates in linguistics focuses on the question of what kinds of data are allowed in different linguistic theories and what subtypes of data can work as evidence for or against particular hypotheses. The first part of the volume puts forward a methodological framework called the ‘p-model’ that is expected to account for the data/evidence problem in linguistics. The aim of the case studies in the second part is to show how this framework can be applied to the everyday research practice of the working linguist, and how it can increase the effectiveness of linguistic theorising. Accordingly, the case studies exemplify that the p-model can come to grips with diverse object-scientific quandaries in syntax, semantics and pragmatics. The third part includes case studies that illustrate how it copes with metascientific issues such as inconsistency in linguistic theories and the relationship between thought experiments and real experiments. 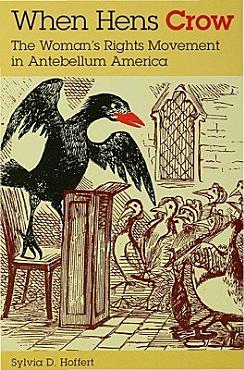 
"The book is a fine addition to the world of academic medical ethics... Readers... will come away with some of the tools for further debate." -- Publishers Weekly "Susan B. Rubin's splendid new book... offers positive, humane solutions to the frustrations that have given rise to the futility debate." -- Carl Elliott, Medical Humanities Review "Rubin offers a thorough and thought-provoking exploration of the concept of futility as a basis for medical decisions." -- Choice "... [the] brilliant analysis found in Rubin's [book] couldn't be more timely.... When Doctors Say No is the most thorough philosophical rebuttal to be found in the literature of medical futility as the basis for unilateral decisionmaking by physicians." -- Charles Weijer, Canadian Medical Association Journal Should physicians be permitted to unilaterally refuse to provide treatment that they deem futile? Even if the patient, or the patient's family, insists that everything possible must be done? In this book, philosopher and bioethicist Rubin examines this controversial issue. She offers a critique of the concept of medical futility and the debate surrounding it, and she calls for more public debate about the underlying issues at stake for all of us -- patients, families, health care providers, insurers, and society at large.