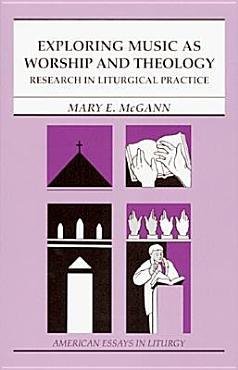 
Exploring Music as Worship and Theology addresses a central challenge to liturgical scholars and pastoral leaders?how to understand the diverse, culturally shaped worship patterns that exist in our multi-cultural church. It situates music as a central lens through which to explore a community?s liturgical practice, and offers a practical method for studying and interpreting the lived experience of a musical-liturgical assembly. Exploring Music as Worship and Theology invites greater attention to the diverse cultural music emerging in our various Christian assemblies, and underscores the need for greater dialogue between our theories of liturgy, music, and the actual practice of local communities.Chapters are ?Interdisciplinary Orientations to Musical-Liturgical Practice,? ?The Research Process,? and ?Creative Dialogue with Liturgical Studies.??. . . offers new insights and wisdom on Christian faith and practice as expressed in Christian music and music making.? The Midwest Book Review?In an era when much writing about liturgy and music betray little more than authorial bias, it is refreshing to read a work stepping back from the ?culture wars? to concentrate on method. . . . Required reading for seminarians and clergy, for graduate students in liturgical studies, and for Christian music ministers.? Mike Joncas University of St. Thomas". . . makes a significant contribution to the pastoral imperative of liberating our liturgical celebrations from the rigid patterns imposed by the rubrical priorities which for centuries have been accepted as the absolute standard and norm for liturgical worship. Recognizing this rubricism 'had all but dried up our liturgical imagination,' McGann offers readers the fruit of her work with an African American Catholic community. Her observations have far-reaching implications for the authentic inculturation of the liturgy in our multi-cultural world. Rigid models cannot meet the needs of this pastoral reality. McGann's methods can aid liturgical leaders to embrace this imperative with fresh insight and much-needed imagination." Louis Weil Professor Church Divinity School of the Pacific"As the U.S. Church increasingly becomes a community of immigrants and refugees, we have a choice on how to welcome this new diversity among us. Will they be forced into American standards of liturgy or will there arise a mutual respect and interchange? Mary McGann's work, moving from theory to pastoral practice, offers fresh ritual and liturgical insights for our changing times. Ultimately, her work will assist pastoral musicians and liturgists in breaking out of Western-European attitudes toward music making and ritual. Her concerns and procedures offer a path out of dominant culture thinking and open rich possibilities for the Church of the 21st century." Rufino Zaragoza, O.F.M. San Damiano Retreat Center Oakland, California". . . a wonderful guide for imagining a church where theology and practice cooperate, where the richness of cultural and experiential diversity informs all liturgy, and where academic study is done with integrity and inclusivity. All this is presented through the medium of liturgical music which opens the door to expansive possibilities using precise and practical suggestions of how to understand the many meanings that ritual and music play in the expression and creation of the Body of Christ." Lizette Larson-Miller Associate Professor of Liturgical Leadership Graduate Theological Union ". . . a truly interdisciplinary and integrated method and research process for studying and interpreting what occurs in the lived liturgical experiences of our faith communities. Professor McGann's book is also a much needed resource as we now take more seriously the task of articulating a plurality of liturgical theologies that actually reflect the diversity of these communities." Michael B. Aune Academic Dean Professor of Liturgical and Historical Studies Pacific Lutheran Theological Seminary"McGann draws on three fields?liturgical studies, ethnomusicology, and ritual studies?to distill for us the foundational role of music in liturgical life. Even more significantly, she articulates its theological import and potential for ritual communities today. McGann brings both expertise in all the theoretical literature and much practical experience to this new frontier in pastoral liturgy. And it is on the fluid frontier of how we worship that theology in this century will have to find its footing. McGann points the way." Catherine Bell Bernard J. Hanley Professor of Religious Studies and Department Chair Asian Studies Program Director Santa Clara University". . . an important book for those who work in the field of liturgical studies. In a clear and engaging manner, Mary McGann makes a significant contribution to the topic of method in liturgical theology by offering an interdisciplinary approach for studying music as liturgical performance. Drawing on theories from the fields of liturgical studies, ethnomusicology, and ritual studies, she offers a new model for incorporating empirical field research into liturgical theology, one which allows music to be explored as a theological act." Margaret Mary Kellerher, O.S.U. Associate Professor and Department Chair Department of Religion and Religious Education Catholic University of America?This small volume will be a useful guide to those interested in doing empirical field research in the area of worship music.? New Theology Review? . . . offers a method of exploring music as worship and theology that goes far deeper than many people are accustomed to using . . . is not merely for scholars but could be used . . . for parishes, especially by music directors, diocesan personnel, or synods.? Ministry & Liturgy 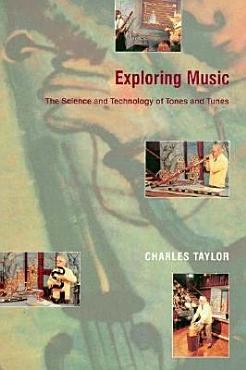 
Lavishly illustrated, Exploring Music: The Science and Technology of Tones and Tunes explains in a nonmathematical way the underlying science of music, musical instruments, tones, and tunes. The author explores the magical quality and science of music, facilitating pleasure and the understanding in both young and older readers. Based primarily on the highly successful series of Christmas lectures given by the author in 1989-1990 at the Royal Institution, this book contains an expanded version of what he demonstrated to live audiences in excess of 2,000 as well as over 10 million television viewers. 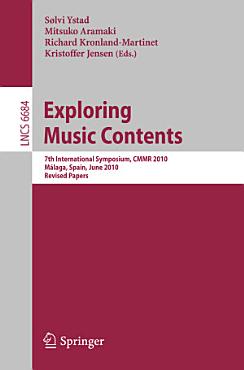 
This book constitutes the thoroughly refereed post-proceedings of the 7th International Symposium on Computer Music Modeling and Retrieval, CMMR 2010, held in Málaga, Spain, in June 2010. The 22 revised full papers presented were specially reviewed and revised for inclusion in this proceedings volume. The book is divided in five main chapters which reflect the present challenges within the field of computer music modeling and retrieval. The chapters range from music interaction, composition tools and sound source separation to data mining and music libraries. One chapter is also dedicated to perceptual and cognitive aspects that are currently subject to increased interest in the MIR community. 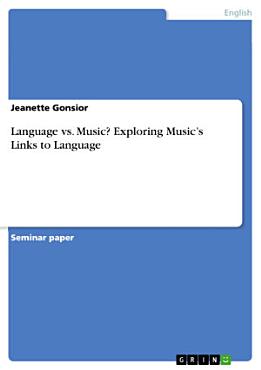 
Seminar paper from the year 2011 in the subject American Studies - Linguistics, grade: 2,0, Humboldt-University of Berlin (Institut fur Anglistik und Amerikanistik), course: Language vs. Culture? A Comparison between Language and Music, language: English, abstract: Language and music--both can be found in every human society--are the most basic socio-cognitive domains of the human species. At first glance, they share fundamental similarities, such as being based on acoustic modalities and involving complex sound sequences. Language, as well as music, functions as a means of communication and a form of expression. Both systems are organized into hierarchically structured sequences, and a written system was developed for language and for music. The interest in music-language relations has a long history, of course, and does not originate with modern cognitive science: "The topic has long drawn interest from a wide range of thinkers, including philosophers, biologists, poets, composers, linguists, and musicologists. Over 2,000 years ago, Plato claimed that the power of certain musical modes to uplift the spirit stemmed from their resemblance to the sounds of noble speech (Neubauer, 1986). Much later, Darwin (1871) considered how a form of communication intermediate between modern language and music may have been the origin of our species' communicative abilities. Many other historical figures have contemplated music-language relations, including Vincenzo Galilei (father of Galileo), Jean-Jacques Rousseau, and Ludwig Wittgenstein. This long line of speculative thinking has continued down to the modern era (e.g., Bernstein, 1976). In the era of cognitive science, however, research into this topic is undergoing a dramatic shift, using new concepts and tools to advance from suggestions and analogies to empirical research." (Cp. PATEL (2008): Music, Language, and the Brain) The production of music and language is a prime example of the human brain's capacities. But does th


Part of a series of books designed to facilitate and integrate thinking, feeling, and doing skills into creative learning experiences. 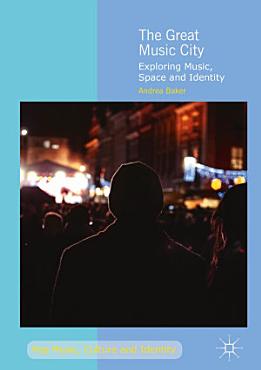 
In the 1960s, as gentrification took hold of New York City, Jane Jacobs predicted that the city would become the true player in the global system. Indeed, in the 21st century more meaningful comparisons can be made between cities than between nations and states. Based on case studies of Melbourne, Austin and Berlin, this book is the first in-depth study to combine academic and industry analysis of the music cities phenomenon. Using four distinctly defined algorithms as benchmarks, it interrogates Richard Florida’s creative cities thesis and applies a much-needed synergy of urban sociology and musicology to the concept, mediated by a journalism lens. Building on seminal work by Robert Park, Lewis Mumford and Jane Jacobs, it argues that journalists are the cultural branders and street theorists whose ethnographic approach offers critical insights into the urban sociability of music activity. 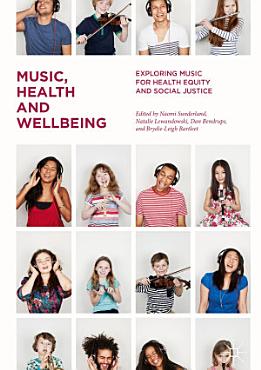 
This book explores the power music has to address health inequalities and the social determinants of health and wellbeing. It examines music participation as a determinant of wellbeing and as a transformative tool to impact on wider social, cultural and environmental conditions. Uniquely, in this volume health and wellbeing outcomes are conceptualised on a continuum, with potential effects identified in relation to individual participants, their communities but also society at large. While arts therapy approaches have a clear place in the text, the emphasis is on music making outside of clinical contexts and the broader roles musicians, music facilitators and educators can play in enhancing wellbeing in a range of settings beyond the therapy room. This innovative edited collection will be of great interest to scholars and practitioners of music, social services, medical humanities, education and the broader health field in the social and medical sciences.