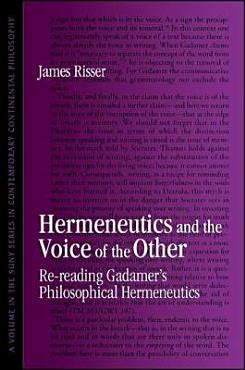 
Elucidates the major components of Gadamer's philosophical hermeneutics found in his later work. 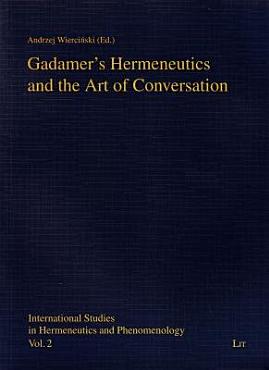 
Gadamer's Hermeneutics and the Art of Conversation covers the nature of dialogue and understanding in Hans-Georg Gadamer's lingually oriented hermeneutics and its relevance for contemporary philosophy. This timely collection of essays stresses the fundamental significance of the other for a further development of Heidegger's analytics of Dasein. By recognizing the priority of the other over oneself, Gadamerian hermeneutics founds a culture of dialogue sorely needed in our multi-cultural globalized community. The essays solicited for this volume are presented in three thematic blocks: "Hermeneutic Conversation," "Hermeneutics, Aesthetics, and Transcendence," "Hermeneutic Ethics, Education, and Politics." The volume proposes a dynamic understanding of hermeneutics as putting into practice the art of conversation. 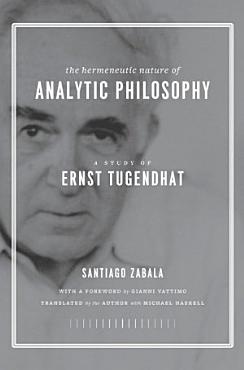 
Contemporary philosopher—analytic as well as continental tend to feel uneasy about Ernst Tugendhat, who, though he positions himself in the analytic field, poses questions in the Heideggerian style. Tugendhat was one of Martin Heidegger's last pupils and his least obedient, pursuing a new and controversial critical technique. Tugendhat took Heidegger's destruction of Being as presence and developed it in analytic philosophy, more specifically in semantics. Only formal semantics, according to Tugendhat, could answer the questions left open by Heidegger. Yet in doing this, Tugendhat discovered the latent "hermeneutic nature of analytic philosophy" its post-metaphysical dimension—in which "there are no facts, but only true propositions." What Tugendhat seeks to answer is this: What is the meaning of thought following the linguistic turn? Because of the rift between analytic and continental philosophers, very few studies have been written on Tugendhat, and he has been omitted altogether from several histories of philosophy. Now that these two schools have begun to reconcile, Tugendhat has become an example of a philosopher who, in the words of Richard Rorty, "built bridges between continents and between centuries." Tugendhat is known more for his philosophical turn than for his phenomenological studies or for his position within analytic philosophy, and this creates some confusion regarding his philosophical propensities. Is Tugendhat analytic or continental? Is he a follower of Wittgenstein or Heidegger? Does he belong in the culture of analysis or in that of tradition? Santiago Zabala presents Tugendhat as an example of merged horizons, promoting a philosophical historiography that is concerned more with dialogue and less with classification. In doing so, he places us squarely within a dialogic culture of the future and proves that any such labels impoverish philosophical research. 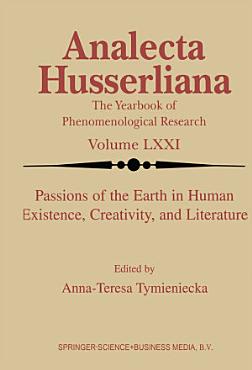 
Literature reveals that the hidden strings of the human `passional soul' are the creative source of the specifically human existence. Continuing the inquiry into the `elemental passions of the soul' and the Human Creative Soul pursued in several previous volumes of this series, the present volume focuses on the `passions of the earth', bringing to light some of the primogenital existential threads of the innermost bonds of the Human Condition and mother earth. In Tymieniecka's words, the studies purpose to unravel the essential bond between the living human being and the earth - a bond that lies at the heart of our existence. A heightened awareness of this bond should enlighten our situation and help us find our existential bearings. 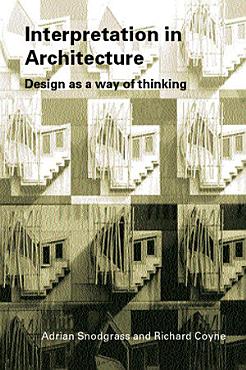 
Drawing on cultural theory, phenomenology and concepts from Asian art and philosophy, this book reflects on the role of interpretation in the act of architectural creation, bringing an intellectual and scholarly dimension to real-world architectural design practice. For practising architects as well as academic researchers, these essays consider interpretation from three theoretical standpoints or themes: play, edification and otherness. Focusing on these, the book draws together strands of thought informed by the diverse reflections of hermeneutical scholarship, the uses of digital media and studio teaching and practice. 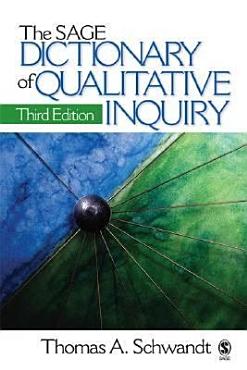 
Now with 70 additional terms as well as a Reader′s Guide, key references have been updated and several terms and phrases from previous editions have been reorganized and expanded. Students and teachers will find this book a very useful resource for navigating various perspectives on qualitative inquiry and as a starting point for launching their own investigations into the issues covered in this guide. 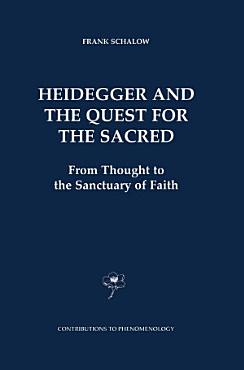 
Although there are various `religious' traces in Heidegger's philosophy, little effort has been made to show the systematic import which his thinking has for outlining a full range of religious and theological questions. Precisely because his thought is opposed to the construction of any `dogma', his vast writings provide clues to what meaning(s) the `Sacred' and the `Divine' may have in a postmodern age where the very possibility of `faith' hangs in the balance. By showing how Heidegger's own thinking can be interpreted as a struggle to come to terms with religious questions, this book undertakes a postmodern investigation of the Sacred which both draws upon and transcends various world-religions and denominations. A postmodern, non-sectarian vision of the Sacred thereby becomes possible which is open to the plurality of religious experiences on the one hand, and yet affirms on the other Heidegger's emphasis (in Beiträge zur Philosophie) on the `last god' as the displacing of all sectarian visions of god. This book will have special appeal to Heidegger scholars, as well as students interested in the overlap between phenomenology and philosophical theology. 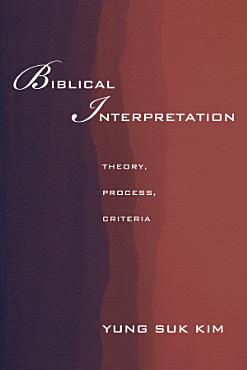 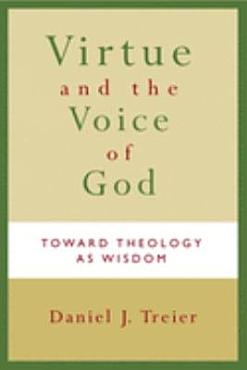 
Theology has its deepest roots as a course of study that leads to wisdom. Yet with the growth of the academy it began to be sidetracked into a fixation with the predictable results of science. In this illuminating study, Daniel Treier retrieves this older, deeper understanding and connects wisdom in theological education to the theological interpretation of scripture, giving rise to a renewed understanding to the role of virtue. Engaging in dialogue with a number of prominent proponents of theological interpretation of scripture, Treier builds on a biblical theology of wisdom that involves daily lives of all God's people. Ultimately, Treier connects educational discussions of theology and hermeneutical discussions through a Trinitarian understanding of wisdom. As a result, the increasingly diverse forms and social locations of theology can be integrated into the mainstream of theological reflection. Filled with interdisciplinary wisdom, Virtue and the Voice of God is a timely recovery of the essential conversation between theological education, virtue and the interpretation of scripture. 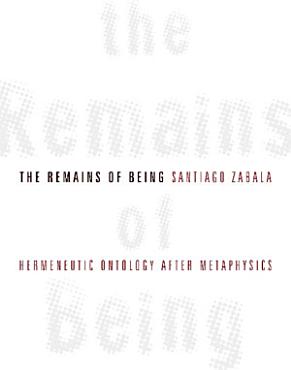 
In Basic Concepts, Heidegger claims that "Being is the most worn-out" and yet also that Being "remains constantly available." Santiago Zabala radicalizes the consequences of these little known but significant affirmations. Revisiting the work of Jacques Derrida, Reiner Schürmann, Jean-Luc Nancy, Hans-Georg Gadamer, Ernst Tugendhat, and Gianni Vattimo, he finds these remains of Being within which ontological thought can still operate. Being is an event, Zabala argues, a kind of generosity and gift that generates astonishment in those who experience it. This sense of wonder has fueled questions of meaning for centuries-from Plato to the present day. Postmetaphysical accounts of Being, as exemplified by the thinkers of Zabala's analysis, as well as by Nietzsche, Dewey, and others he encounters, don't abandon Being. Rather, they reject rigid, determined modes of essentialist thought in favor of more fluid, malleable, and adaptable conceptions, redefining the pursuit and meaning of philosophy itself. 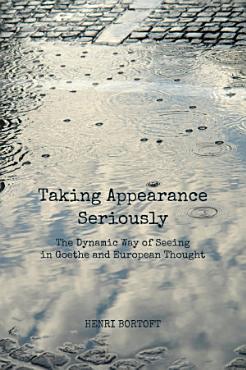 
The history of western metaphysi from Plato onwards is dominated by the dualism of being and appearance. What something really is (its true being) is believed to be hidden behind the 'mere appearances' through which it manifests. Twentieth-century European thinkers radically overturned this foundation. With Martin Heidegger and Hans-Georg Gadamer came a major step towards taking appearance seriously, exploring a way of seeing that draws attention back 'upstream', from what is experienced into the act of experiencing. Understood in this way, perception is a dynamic event, a 'phenomenon', in which the observer participates. Henri Bortoft guides us through this dynamic way of seeing in various areas of experience -- in distinguishing things, the finding of meaning, and the relationship between thought and words. He also explores similarities with Goethe's reflections on the coming-into-being of the living plant. Here, in another reversal of classical thinking, we find that even in their 'diversity of appeareances', living things are not separate but in relation. Diversity is the dynamic unity of life itself. Expanding the scope of his previous book, The Wholeness of Nature, the author shows how Goethean insights combine with the dynamic way of seeing in continental philosophy to offer us an actively experienced 'life of meaning'. This book will be of interest to anyone who wants to understand the contribution and wider implications of modern European thought in the world today. 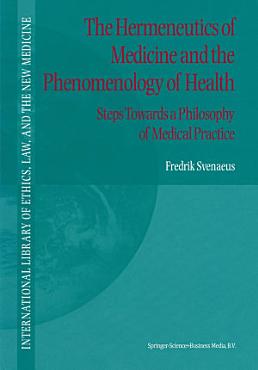 
Fredrik Svenaeus' book is a delight to read. Not only does he exhibit keen understanding of a wide range of topics and figures in both medicine and philosophy, but he manages to bring them together in an innovative manner that convincingly demonstrates how deeply these two significant fields can be and, in the end, must be mutually enlightening. Medicine, Svenaeus suggests, reveals deep but rarely explicit themes whose proper comprehension invites a careful phenomenological and hermeneutical explication. Certain philosophical approaches, on the other hand - specifically, Heidegger's phenomenology and Gadamer's hermeneutics - are shown to have a hitherto unrealized potential for making sense of those themes long buried within Western medicine. Richard M. Zaner, Ann Geddes Stahlman Professor of Medical Ethics, Vanderbilt University