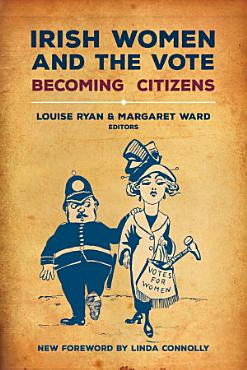 
This landmark book, reissued with a new foreword to mark the centenary of Irish women being granted the right to vote, is the first comprehensive analysis of the Irish suffrage movement from its mid-nineteenth-century beginnings to when feminist militancy exploded on the streets of Dublin and Belfast in the early twentieth century. Younger, more militant suffragists took their cue from their British counterparts, two of whom travelled to Ireland to throw a hatchet into the carriage of Prime Minister Herbert Asquith on O’Connell Bridge in 1912 (missing him but grazing Home Rule leader John Redmond, who was in the same carriage; both politicians opposed giving women the Vote). Despite such dramatic publicity, and other non-violent campaigning, women’s suffrage was a minority interest in an Ireland more concerned with the issue of gaining independence from Britain. The particular complexity of the Irish struggle is explored with new perspectives on unionist and nationalist suffragists and the conflict between Home Rule and suffragism, campaigning for the vote in country towns, life in industrial Belfast, conflicting feminist views on the First World War, and the suffragist uncovering of sexual abuse and domestic violence, as well as the pioneering use of hunger strike as a political tool. The ultimate granting of the franchise in 1918 represented the end of a long-fought battle by Irish women for the right to equal citizenship, and the beginning of a new Ireland that continues to debate the rights and equality of its female citizens. 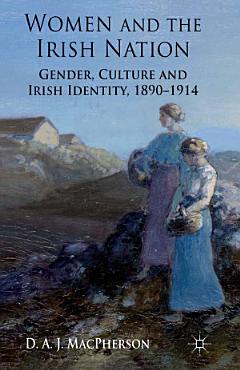 
At the turn of the twentieth century women played a key role in debates about the nature of the Irish nation. Examining women's participation in nationalist and rural reform groups, this book is an important contribution to our understanding of Irish identity in the prelude to revolution and how it was shaped by women. 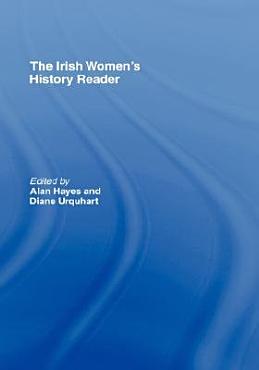 
An exciting collection of essays revealing the tremendous diversity of women's experiences in Ireland's past. For the first time, this unique book draws together key articles published in the field over the last two decades. 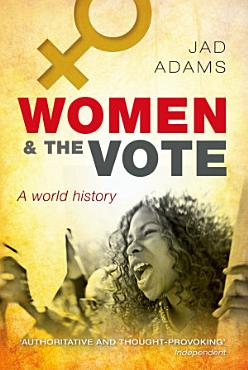 
Before 1893 no woman anywhere in the world had the vote in a national election. A hundred years later almost all countries had enfranchised women, and it was a sign of backwardness not to have done so. This is the story of how this momentous change came about. The first genuinely global history of women and the vote, it takes the story of women in politics from the earliest times to the present day, revealing startling new connections across time and national boundaries - from Europe and North America to Asia, Africa, Latin America, and the Muslim world post-9/11. A story of individuals as well as of wider movements, it includes the often dramatic life-stories of women's suffrage pioneers from across the world, painting vivid biographical portraits of everyone from Susan B. Anthony and the Pankhursts to hitherto lesser-known activists in China, Latin America, and Africa. It is also the first major post-feminist history of women's struggle for the vote. Controversially, Jad Adams rejects the widely accepted idea that success was primarily a result of the pressure group politics of the suffragists and their supporters. Ultimately, he argues, it was nationalism, not feminism, that was the most important factor in winning women the vote. 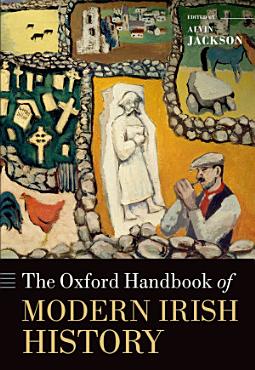 
The study of Irish history, once riven and constricted, has recently enjoyed a resurgence, with new practitioners, new approaches, and new methods of investigation. The Oxford Handbook of Modern Irish History represents the diversity of this emerging talent and achievement by bringing together 36 leading scholars of modern Ireland and embracing 400 years of Irish history, uniting early and late modernists as well as contemporary historians. The Handbook offers a set of scholarly perspectives drawn from numerous disciplines, including history, political science, literature, geography, and the Irish language. It looks at the Irish at home as well as in their migrant and diasporic communities. The Handbook combines sets of wide thematic and interpretative essays, with more detailed investigations of particular periods. Each of the contributors offers a summation of the state of scholarship within their subject area, linking their own research insights with assessments of future directions within the discipline. In its breadth and depth and diversity, The Oxford Handbook of Modern Irish History offers an authoritative and vibrant portrayal of the history of modern Ireland.


The campaign for women's votes in Ireland coincided with the nationalist movement, the First World War, the rise of the trade union movement, the cultural revival and, of course, the 1916 Rising. It culminated in 1918, with Ireland electing the first woman to parliament in London. However, the Irish suffrage movement was not a single-issue group. It did not merely campaign for votes, but also presented a feminist critique of the plight of Irish women in early twentieth-century society. The Irish Citizen newspaper, as the voice of the suffrage movement, provides an important insight into the various campaigns and concerns of this fascinating movement. The paper was self-consciously feminist, and, in addition to covering the major events of this tumultuous period, it addressed taboo subjects like rape, domestic violence, and child abuse. This book brings together extracts from the paper with analysis, commentary, and informative contextual background. First published in 1996, this new edition has been comprehensively updated and revised. [Subject: Gender Studies, Suffrage Movement, Irish Studies, 20th C. Studies, History, Media Studies] 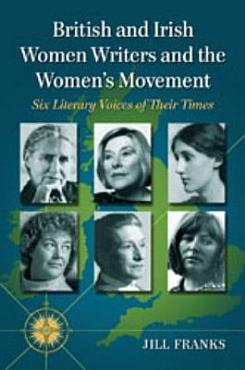 
This study pairs selected Irish and British women novelists of three periods, relating their voices to the women’s movements in their respective nations. In the first wave, nationalist and militant ideologies competed with the suffrage fight in Ireland. Elizabeth Bowen’s The Last September illustrates the melancholy of gender performance and confusion of ethnic identity in the dying Anglo-Irish Ascendancy class. In England, suffrage ideologies clashed with socialism and patriotism. Virginia Woolf’s Mrs. Dalloway contains a political unconscious that links its characters across class and gender. In the second wave, heterosexual romantic relationships come under scrutiny. Edna O’Brien’s Country Girls trilogy reveals ways in which Irish Catholic ideologies abject femaleness; her characters internalize this abjection to the point of self-destruction. Doris Lessing’s The Golden Notebook pits the protagonist’s aspirations to write novels against the Communist Party’s prohibitions on bourgeois values. In the third wave, Irish writers express the frustrations of their cultural identity. Nuala O’Faolain’s My Dream of You takes her protagonist back to Ireland to heal her psychic wounds. In England, Thatcherism had created a materialistic culture that eroded many feminists’ socialist values. Fay Weldon’s Big Woman satirizes the demise of second-wave idealism, asking where feminism can go from here. 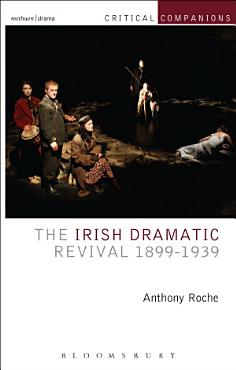 
The Irish Dramatic Revival was to radically redefine Irish theatre and see the birth of Ireland's national theatre, the Abbey, in 1904. From a consideration of such influential precursors as Boucicault and Wilde, Anthony Roche goes on to examine the role of Yeats as both founder and playwright, the one who set the agenda until his death in 1939. Each of the major playwrights of the movement refashioned that agenda to suit their own very different dramaturgies. Roche explores Synge's experimentation in the creation of a new national drama and considers Lady Gregory not only as a co-founder and director of the Abbey Theatre but also as a significant playwright. A chapter on Shaw outlines his important intervention in the Revival. O'Casey's four ground-breaking Dublin plays receive detailed consideration, as does the new Irish modernism that followed in the 1930s and which also witnessed the founding of the Gate Theatre in Dublin. The Companion also features interviews and essays by leading theatre scholars and practitioners Paige Reynolds, P.J. Mathews and Conor McPherson who provide further critical perspectives on this period of radical change in modern Irish theatre. 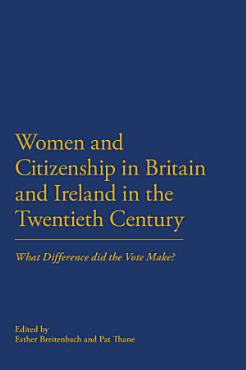 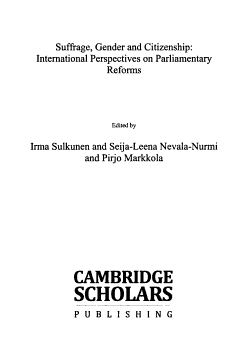 
This publication studies suffrage, citizenship and parliamentary reforms in various socio-political contexts. It brings together new research from a wide range of scholars and disciplines. In addition to pioneers, attention is given to Austria, Britain, Canada, Hungary, Iran, Ireland, Israel, Poland, Romania, Russia and Slovenia, among others. By highlighting national differences, the collection strives to disperse the universalising trend of research. The chapters suggest that the age of suffrage narratives based on a view of universal emancipation is over; more significant are deconstructive approaches and analyses embedded in local factors. 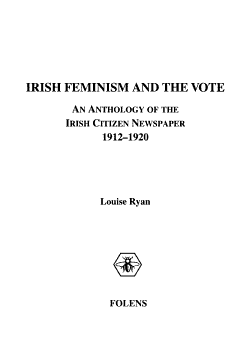 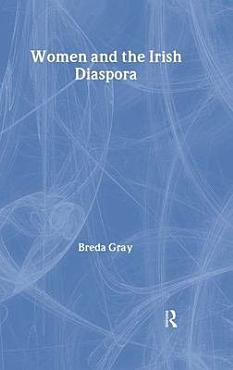 
Based on original research with Irish women both at home and in England, this book explores how questions of mobility and stasis are recast along gender, class, racial and generational lines.