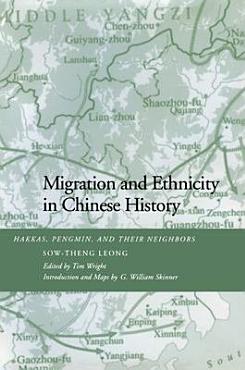 
This book analyzes the emergence of ethnic consciousness among Hakka-speaking people in late imperial China in the context of their migrations in search of economic opportunities. It poses three central questions: What determined the temporal and geographic pattern of Hakka and Pengmin (a largely Hakka-speaking people) migration in this era? In what circumstances and over what issues did ethnic conflict emerge? How did the Chinese state react to the phenomena of migration and ethnic conflict? To answer these questions, a model is developed that brings together three ideas and types of data: the analytical concept of ethnicity; the history of internal migration in China; and the regional systems methodology of G. William Skinner, which has been both a breakthrough in the study of Chinese society and an approach of broad social-scientific application. Professor Skinner has also prepared eleven maps for the book, as well as the Introduction. The book is in two parts. Part I describes the spread of the Hakka throughout the Lingnan, and to a lesser extent the Southeast Coast, macroregions. It argues that this migration occurred because of upswings in the macroregional economies in the sixteenth century and in the late seventeenth and early eighteenth centuries. As long as economic opportunities were expanding, ethnic antagonisms were held in check. When, however, the macroregional economies declined, in the mid-seventeenth and late eighteenth centuries, ethnic tensions came to the fore, notably in the Hakka-Punti War of the mid-nineteenth century. Part II broadens the analysis to take into account other Hakka-speaking people, notably the Pengmin, or "shack people. When new economic opportunities opened up, the Pengmin moved to the peripheries of most of the macroregions along the Yangzi valley, particularly to the highland areas close to major trading centers. As with the Hakka, ethnic antagonisms, albeit differently expressed, emerged as a result of a declining economy and increased competition for limited resources in the main areas of Pengmin concentration. 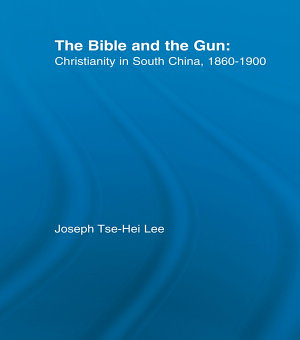 
This book takes a new look at the impacts of Christianity in the late-nineteenth-century China. Using American Baptist and English Presbyterian examples in Guangdong province, it examines the scale of Chinese conversions, the creation of Christian villages, and the power relations between Christians and non-Christians, and between different Christian denominations. This book is based on a very comprehensive foundation of data. By supplementing the Protestant missionary and Chinese archival materials with fieldwork data that were collected in several Christian villages, this study not only highlights the inner dynamics of Chinese Christianity but also explores a variety of crisis management strategies employed by missionaries, Christian converts, foreign diplomats and Chinese officials in local politics. 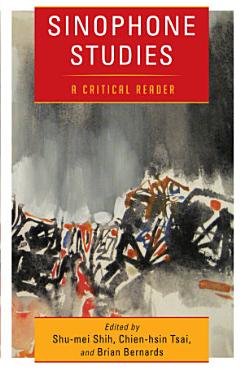 
This definitive anthology casts Sinophone studies as the study of Sinitic-language cultures born of colonial and postcolonial influences. Essays by such authors as Rey Chow, Ha Jin, Leo Ou-fan Lee, Ien Ang, Wei-ming Tu, and David Wang address debates concerning the nature of Chineseness while introducing readers to essential readings in Tibetan, Malaysian, Taiwanese, French, Caribbean, and American Sinophone literatures. By placing Sinophone cultures at the crossroads of multiple empires, this anthology richly demonstrates the transformative power of multiculturalism and multilingualism, and by examining the place-based cultural and social practices of Sinitic-language communities in their historical contexts beyond "China proper," it effectively refutes the diasporic framework. It is an invaluable companion for courses in Asian, postcolonial, empire, and ethnic studies, as well as world and comparative literature. 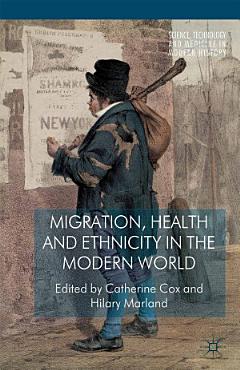 
The volume focuses on the relationship between migration, health and illness in a global context from c.1820 to the present day. It takes a wide range of finely-grained case studies to examine epidemic disease and its containment, chronic illness and mental breakdown and the health management of migrant populations in the modern world. 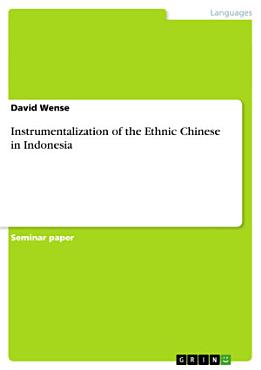 
Seminar paper from the year 2008 in the subject South Asian Studies, South-Eastern Asian Studies, grade: 1, University of Vienna (Institut fur Ostasienwissenschaften), course: Chinese Migration, 23 entries in the bibliography, language: English, abstract: This paper focuses the Chinese of Indonesia, that group that is assumed to dominate the economy as well as to be unassimilable (Oetomo 1989). In the course of this essay, the follwing thesis will be examined: only because of the political and economic intrumentalization by the Dutch colonial government, the Chinese migrants became the so-called seperated "ethnic Chinese minority group" and stayed in this condition as a result of the independent Indonesian state's policy. The first part of this paper presents an explanation of the term "migration" and introduces an overview of migration research and the history of migration to South East Asia. While the second part discusses the theoretical premisis of the construction of an ethnical minority, the third part reassess the drawn conclusion on the case of the Chinese in Indonesia. A summary of the results are given in the conclusion." 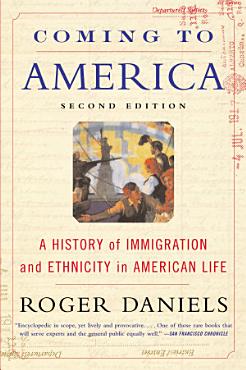 
One of our generation’s best historical accounts of immigration in the United States from the earliest colonial days “Encyclopedic in scope, yet lively and provocative…. One of those rare book that will serve experts and the general public equally well.” – San Francisco Chronicle Former professor Roger Daniels does his utmost to capture the history of immigration to America as accurately as possible in this definitive account of one of the most pressing and layered social issues of our time. With chapters that include statistics, maps, and charts to help us visualize the change taking place in the age of globalization, this is a fascinating read for both the student studying immigration patterns and the general reader who wishes to be more well-informed from a quantitative perspective. Daniels places more recent cases of migration in the Americas within the rich history of the continents pre-colonialism. This invaluable resource is filled with maps and charts designed to help the reader see patterns that surface when studying the movement of peoples over time. 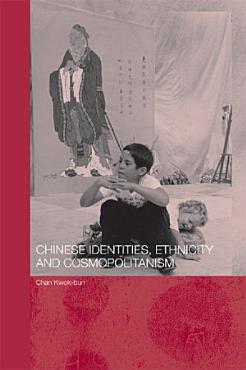 
Drawing upon wide-ranging case study material, the book explores the ever-changing personal and cultural identity of Chinese migrants and the diverse cosmopolitan communities they create. The various models of newly-forged communities are examined with the added dimension of personal identity and the individual's place in society. With particular emphasis on the changing face of Chinese ethnicity in a range of established places of convergence, Chan draws on extensive experience and knowledge in the field to bring the reader a fresh, fascinating and ultimately very human analysis of migration, culture, identity and the self. 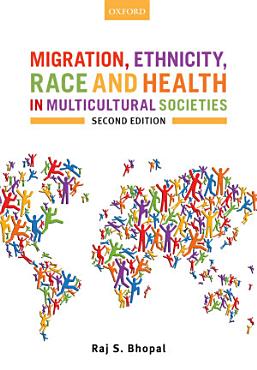 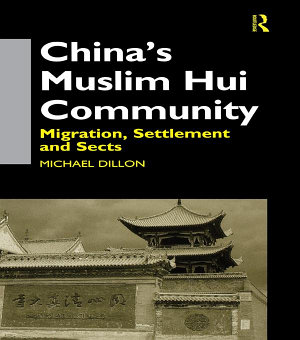 
This is a reconstruction of the history of the Muslim community in China known today as the Hui or often as the Chinese Muslims as distinct from the Turkic Muslims such as the Uyghurs. It traces their history from the earliest period of Islam in China up to the present day, but with particular emphasis on the effects of the Mongol conquest on the transfer of central Asians to China, the establishment of stable immigrant communities in the Ming dynasty and the devastating insurrections against the Qing state during the nineteenth century. Sufi and other Islamic orders such as the Ikhwani have played a key role in establishing the identity of the Hui, especially in north-western China, and these are examined in detail as is the growth of religious education and organisation and the use of the Arabic and Persian languages. The relationship between the Chinese Communist Party and the Hui as an officially designated nationality and the social and religious life of Hui people in contemporary China are also discussed. 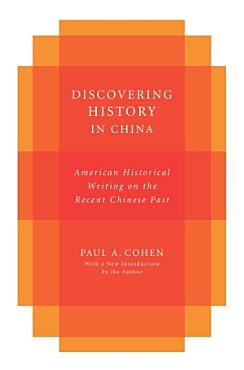 
Since its first publication, Paul A. Cohen's Discovering History in China has occupied a singular place in American China scholarship. Translated into three East Asian languages, the volume has become essential to the study of China from the early nineteenth century to today. Cohen critiques the work of leading postwar scholars and is especially adamant about not reading China through the lens of Western history. To this end, he uncovers the strong ethnocentric bias pervading the three major conceptual frameworks of American scholarship of the 1950s and 1960s: the impact-response, modernization, and imperialism approaches. In place of these, Cohen favors a "China-centered" approach in which historians understand Chinese history on its own terms, paying close attention to Chinese historical trajectories and Chinese perceptions of their problems, rather than a set of expectations derived from Western history. In an important new introduction, Cohen reflects on his fifty-year career as a historian of China and discusses major recent trends in the field. Although some of these developments challenge a narrowly conceived China-centered approach, insofar as they enable more balanced comparisons between China and the West and recast the Chinese and their history in more human, less exotic terms, they powerfully affirm the central thrust of Cohen's work.