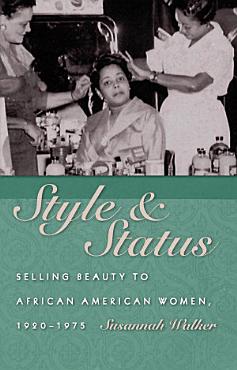 
Between the 1920s and the 1970s, American economic culture began to emphasize the value of consumption over production. At the same time, the rise of new mass media such as radio and television facilitated the advertising and sales of consumer goods on an unprecedented scale. In Style and Status: Selling Beauty to African American Women, 1920--1975, Susannah Walker analyzes an often-overlooked facet of twentieth-century consumer society as she explores the political, social, and racial implications of the business devoted to producing and marketing beauty products for African American women. Walker examines African American beauty culture as a significant component of twentieth-century consumerism, and she links both subjects to the complex racial politics of the era. The efforts of black entrepreneurs to participate in the American economy and to achieve self-determination of black beauty standards often caused conflict within the African American community. Additionally, a prevalence of white-owned firms in the African American beauty industry sparked widespread resentment, even among advocates of full integration in other areas of the American economy and culture. Concerned African Americans argued that whites had too much influence over black beauty culture and were invading the market, complicating matters of physical appearance with questions of race and power. Based on a wide variety of documentary and archival evidence, Walker concludes that African American beauty standards were shaped within black society as much as they were formed in reaction to, let alone imposed by, the majority culture. Style and Status challenges the notion that the civil rights and black power movements of the 1950s through the 1970s represents the first period in which African Americans wielded considerable influence over standards of appearance and beauty. Walker explores how beauty culture affected black women's racial and feminine identities, the role of black-owned businesses in African American communities, differences between black-owned and white-owned manufacturers of beauty products, and the concept of racial progress in the post--World War II era. Through the story of the development of black beauty culture, Walker examines the interplay of race, class, and gender in twentieth-century America. 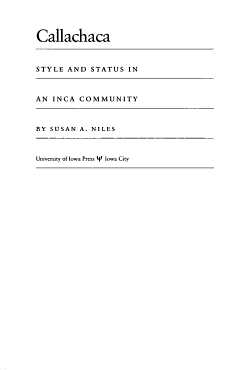 
Inca constructions, designed to conform to a state aesthetic, reveal the worldview of these masters of social and architectural engineering. In her meticulous analysis of CallachacaOCothe fifteenth-century estate of the royal Amaro Topa Inca and his retainers near the ancient capital of CuzcoOCoSusan Niles shows us that the physical order seen in this planned community reflects the Inca vision of an appropriate social order. "Callachaca: Style and Status in an Inca Community" will be valuable reading for archaeologists, art historians, geographers, architects with an interest in pre-Columbian cultures, landscape architects, anthropologists, folklorists, and historians with a special interest in the Andes. Since she focuses on all the varied architectural remains at one site in the Inca heartland, Niles provides a unique model for examining royal Inca architecture and society."


From ancient Egypt to Ascot, Versailles to the White House, hats have been emblems of style and status, badges of rank and distinction. Hats are rich with significance for the societies that create and wear them. This sparkling guide captures a fascinating subject from every angle, to delight fashion historians, designers, and anyone with a taste for poise, elegance, and fun. Over 300 illus. 82 in color.


There have been many books about Victorian and Edwardian houses, but this is the first to concentrate on the taste of the nouveaux riches. Not just the rich but the very rich: those who grew immensely wealthy in the aftermath of the Industrial Revolution. Cotton, shipping, steel, real estate, diamonds, chemicals, banking, the stock market -- that was how they made their money. But what did they do with it? Where and how did they live? J. Mordaunt Crook, one of Britain's leading architectural historians, describes the houses of the richest of the new rich -- the Rothschilds, the Guinnesses, the Beits and the Brasseys, the Barings, the Wernhers, the Tennants, the Sassoons -- and explains the economic and social context that sustained their extraordinary lifestyles. In effect, he tells the story of the remaking of the British ruling class. Enhanced with numerous photos as well as excerpts from novels, diaries, and memoirs. 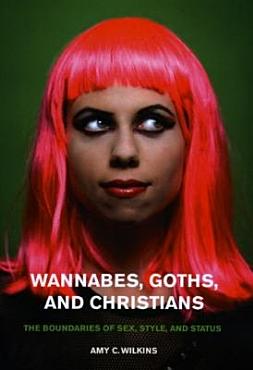 
On college campuses and in high school halls, being white means being boring. Since whiteness is the mainstream, white kids lack a cultural identity that’s exotic or worth flaunting. To remedy this, countless white youths across the country are now joining more outré subcultures like the Black- and Puerto Rican–dominated hip-hop scene, the glamorously morose goth community, or an evangelical Christian organization whose members reject campus partying. Amy C. Wilkins’s intimate ethnography of these three subcultures reveals a complex tug-of-war between the demands of race, class, and gender in which transgressing in one realm often means conforming to expectations in another. Subcultures help young people, especially women, navigate these connecting territories by offering them different sexual strategies: wannabes cross racial lines, goths break taboos by becoming involved with multiple partners, and Christians forego romance to develop their bond with God. Avoiding sanctimonious hysteria over youth gone astray, Wilkins meets these kids on their own terms, and the result is a perceptive and provocative portrait of the structure of young lives. 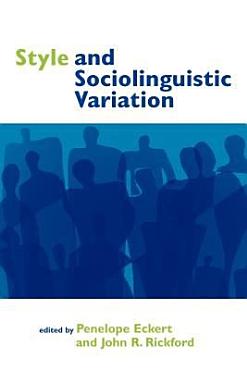 
This study of sociolinguistic variation examines the relation between social identity and ways of speaking. Studying variations in language not only reveals a great deal about speakers' strategies with respect to variables such as social class, gender, ethnicity and age, it also affords us the opportunity to observe linguistic change in progress. The volume brings together leading experts from a range of disciplines to create a broad perspective on the study of style and variation. Beginning with an introduction to theoretical issues, the book goes on to discuss key approaches to stylistic variation in spoken language, including such issues as attention paid to speech, audience design, identity construction, the corpus study of register, genre, distinctiveness and the anthropological study of style. Rigorous and engaging, this book will become the standard work on stylistic variation. It will be welcomed by students and academics in sociolinguistics, English language, dialectology, anthropology and sociology. 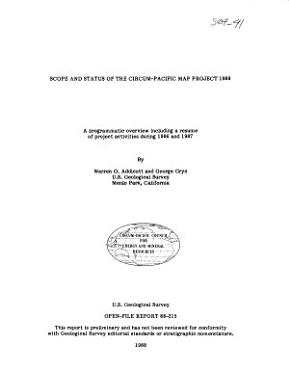 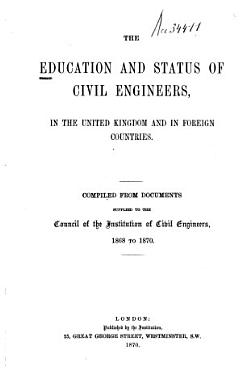 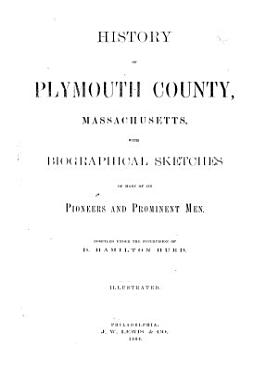 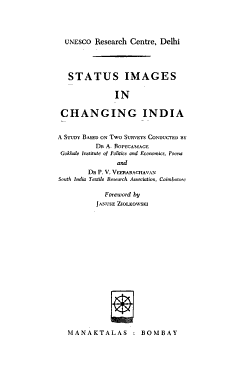 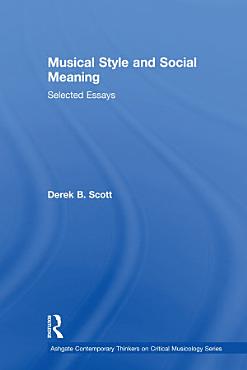 
Why do we feel justified in using adjectives such as romantic, erotic, heroic, melancholic, and a hundred others when speaking about music? How do we locate these meanings within particular musical styles? These are questions that have occupied Derek Scott's thoughts and driven his critical musicological research for many years. In this selection of essays, dating from 1995-2010, he returns time and again to examining how conventions of representation arise and how they become established. Among the themes of the collection are social class, ideology, national identity, imperialism, Orientalism, race, the sacred and profane, modernity and postmodernity, and the vexed relationship of art and entertainment. A wide variety of musical styles is discussed, ranging from jazz and popular song to the symphonic repertoire and opera.