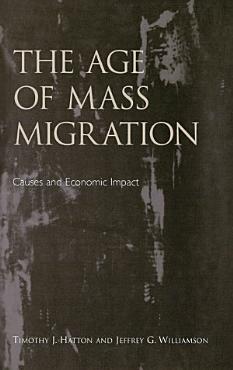 
About 55 million Europeans migrated to the New World between 1850 and 1914, landing in North and South America and in Australia. This mass migration marked a profound shift in the distribution of global population and economic activity. In this book, Timothy J. Hatton and Jeffrey G. Williamson describe the migration and analyze its causes and effects. Their study offers a comprehensive treatment of a vital period in the modern economic development of the Western world. Moreover, it explores questions that we still debate today: Why does a nation's emigration rate typically rise with early industrialization? How do immigrants choose their destinations? Are international labor markets segmented? Do immigrants "rob" jobs from locals? What impact do migrants have on living standards in the host and sending countries? Did mass migration make an important contribution to the catching-up of poor countries on rich? Did it create a globalization backlash? This work takes a new view of mass migration. Although often bold and controversial in method, it is the first to assign an explicitly economic interpretation to this important social phenomenon. The Age of Mass Migration will be useful to all students of migration, and to anyone interested in economic growth and globalization.


A possible unintended but damaging consequence of anti-immigrant rhetoric, and the policies it inspires, is that they may put high-skilled immigrants off more than low-skilled ones at times when countries and businesses intensify their competition for global talent. We investigate this argument following the location choices of thousands of immigrant inventors across US counties during the Age of Mass Migration. To do so we combine a unique USPTO historical patent dataset with Census data and exploit exogenous variation in both immigration flows and diversity induced by former settlements, WWI and the 1920s Immigration Acts. We find that co-ethnic networks play an important role in attracting immigrant inventors. However, we also find that immigrant diversity acts as an additional significant pull factor. This is mainly due to externalities that foster immigrant inventors' innovativeness. These findings are relevant for today's advanced economies that have become major receivers of migrant flows and, in a long-term perspective, have started thinking about immigration in terms of not only level but also composition. 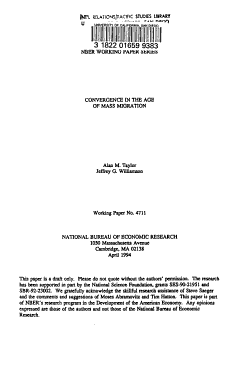 
Between 1870 and 1913, economic convergence among present OECD members (or even a wider sample of countries) was dramatic, about as dramatic as it has been over the past century and a half. The convergence can be documented in GDP per worker-hour, GDP per capita and in real wages. What were the sources of the convergence? One prime candidate is mass migration. In the absence of quotas, this was a period of open international migration, and the numbers who elected to move were enormous. If international migration is ever to play a role in contributing to convergence, the pre-quota period surely should be it. This paper offers some estimates which suggest that migration could account for very large shares of the convergence in GDP per worker and real wages, though a much smaller share in GDP per capita. One might conclude, therefore, that the interwar cessation of convergence could be partially explained by the imposition of quotas and other barriers to migration. The paper concludes with caution as it enumerates the possible offsets to the mass migration impact which our partial equilibrium analysis ignores, and with the plea that convergence models pay more attention to open-economy forces. 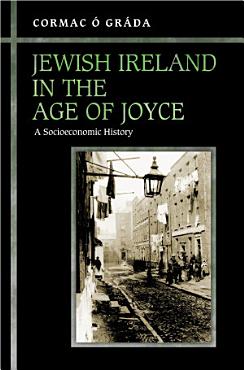 
James Joyce's Leopold Bloom--the atheistic Everyman of Ulysses, son of a Hungarian Jewish father and an Irish Protestant mother--may have turned the world's literary eyes on Dublin, but those who look to him for history should think again. He could hardly have been a product of the city's bona fide Jewish community, where intermarriage with outsiders was rare and piety was pronounced. In Jewish Ireland in the Age of Joyce, a leading economic historian tells the real story of how Jewish Ireland--and Dublin's Little Jerusalem in particular--made ends meet from the 1870s, when the first Lithuanian Jewish immigrants landed in Dublin, to the late 1940s, just before the community began its dramatic decline. In 1866--the year Bloom was born--Dublin's Jewish population hardly existed, and on the eve of World War I it numbered barely three thousand. But this small group of people quickly found an economic niche in an era of depression, and developed a surprisingly vibrant web of institutions. In a richly detailed, elegantly written blend of historical, economic, and demographic analysis, Cormac Ó Gráda examines the challenges this community faced. He asks how its patterns of child rearing, schooling, and cultural and religious behavior influenced its marital, fertility, and infant-mortality rates. He argues that the community's small size shaped its occupational profile and influenced its acculturation; it also compromised its viability in the long run. Jewish Ireland in the Age of Joyce presents a fascinating portrait of a group of people in an unlikely location who, though small in number, comprised Ireland's most resilient immigrant community until the Celtic Tiger's immigration surge of the 1990s. 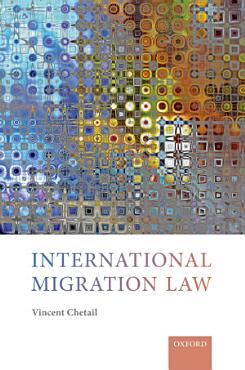 
A unique and comprehensive overview on the numerous international rules governing migration, this book brings together and analyses the disparate norms and treaties within international and European law. It is a critical study of the role of international law in regulating the movement of persons, offering an ideal introduction to the field. 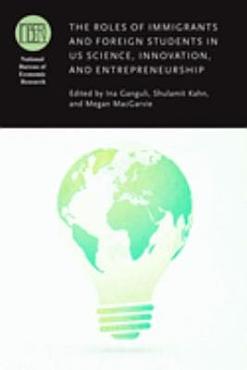 
The number of immigrants in the US science, technology, engineering, and mathematics (STEM) workforce and among recipients of advanced STEM degrees at US universities has increased in recent decades. In light of the current public debate about immigration, there is a need for evidence on the economic impacts of immigrants on the STEM workforce and on innovation. Using new data and state-of-the-art empirical methods, this volume examines various aspects of the relationships between immigration, innovation, and entrepreneurship, including the effects of changes in the number of immigrants and their skill composition on the rate of innovation; the relationship between high-skilled immigration and entrepreneurship; and the differences between immigrant and native entrepreneurs. It presents new evidence on the postgraduation migration patterns of STEM doctoral recipients, in particular the likelihood these graduates will return to their home country. This volume also examines the role of the US higher education system and of US visa policy in attracting foreign students for graduate study and retaining them after graduation. 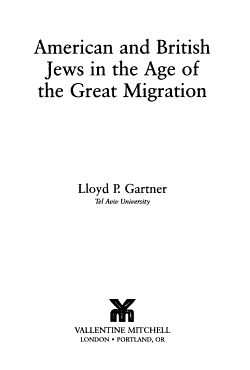 
"Professor Gartner emphasizes the cultural and economic transformation of the masses of immigrants, and deals frankly with some of their social problems. His studies pay attention to the religious behaviour of the immigrants, which ranged from zeal to maintain traditions in full to indifference and even negative attitudes. An important place is taken by the sensitive, often difficult, relations between the immigrants and the established Jewish communities of their adopted countries." "This collection makes readily available Professor Gartner's essays on the Great Migration and will be invaluable to students of many aspects of modern Jewish history." --Book Jacket. 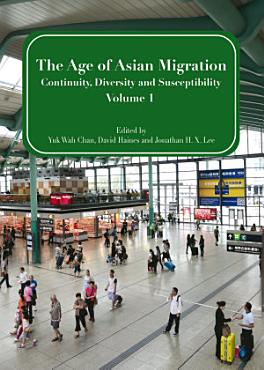 
The second half of the 20th century witnessed a series of mass migration in Asia due to war, politics and economic turbulence. Combined with recent global economic changes, the result is that Asia is now the world region producing the most international migrants and receiving the second most migrants. Asian migration has thus been of central concern to both academic researchers and policy communities. This book (together with its forthcoming second volume) provides a full span discussion of Asian migration from historical perspectives to updated analyses of current migration flows and diasporas. The book covers six sub-regional areas through focused themes: • Northeast Asia: Coping with Diversity in Japan and Korea • East Asian Chinese Migration: Taiwan, Hong Kong and China • Vietnamese Migration and Diaspora • Cambodian, Lao and Hmong Diaspora and Settlement • Singapore: New Immigrants and Return Migration • South Asian Migration and Diaspora Academics as well as general readers will find this book useful for understanding the specific features of Asian migration, and how these features have evolved since the latter part of the 20th century. In providing an overall reassessment of Asian migration, the book enhances academic discussion of Asian migration, with crucial implications for migration-related policy-making in the region. 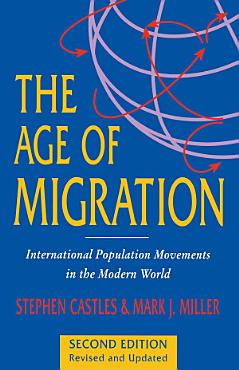 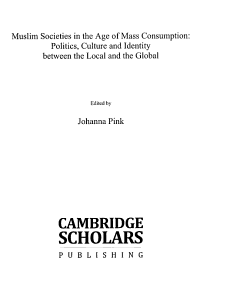 
The papers in this anthology present innovative approaches to a wide range of issues that have, so far, barely received scholarly attention. The topics range from the changing spaces of consumption to Islamic branding, from the marketing of religious music to the consumption patterns of Muslim minority groups. 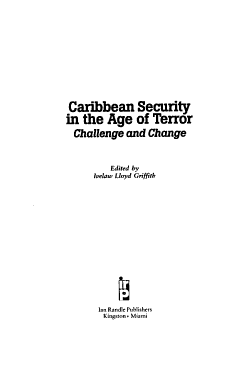 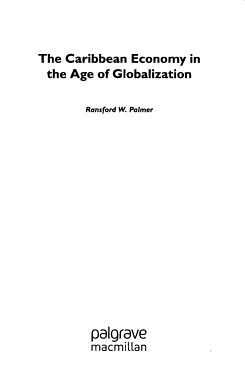 
The book examines the status of the Anglophone Caribbean economy and the options it faces as traditional preferential trade arrangements begin to disappear. Two broad options are explored: one is the transformation of primary exports into higher value-added products and the other is a shift in the economic structure toward tourism and other services. The book constructs a model of a potential Caribbean economy, described as a travel economy. The travel economy is based on two enduring features of Caribbean life—tourism and migration.—and it is meant to provide a benchmark against which to gauge the evolution of the structure of individual economies. The main contribution of this book is a concise and methodological treatment of the issues of transition and adjustment that the Caribbean faces in an increasingly liberalized international trading system.