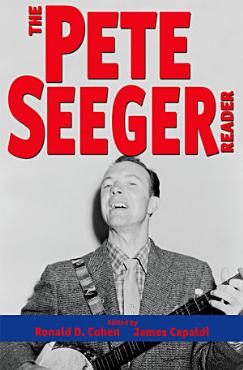 
The Pete Seeger Reader brings together writing by and about Seeger and covers his songwriting, recording, book and magazine publishing, and political organizing over the course of his lengthy, storied career. 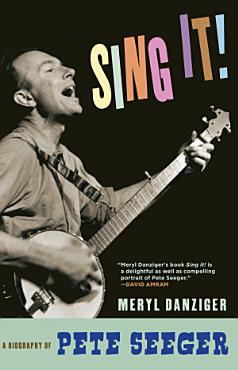 
A tall, skinny man in blue jeans stands on a stage, one hand on his banjo, the other raised to the crowd of 15,000 people who have come to celebrate his ninetieth birthday. "Sing it!" he shouts, and everyone sings. How did a humble, banjo-playing Harvard University dropout become one of the most influential figures of the twentieth century? This is the story of Pete Seeger—singer, songwriter, social activist, environmentalist—who filled his toolbox with songs and set out to repair whatever in the world was broken. His story intertwines with a century of American history, and readers will be surprised to discover how many familiar songs, people, and projects somehow connect back to this one individual. What was it like for a city boy like Pete to hope freight trains with Woody Guthrie, the free-spirited composter of "This Land Is Your Land"? "The Lion Sleeps Tonight," a song beloved by people all over the world, might have been lost to history had it not been for Pete Seeger. The Hudson River is cleaner than it used to be; what did Pete do to help that happen? Through learning of his life of activism, readers will become links in the chain, inspired to reflect on their own power to make change. From the Hardcover edition. 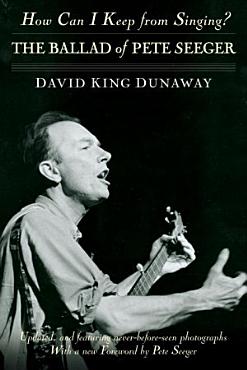 
How Can I Keep from Singing? is the compelling story of how the son of a respectable Puritan family became a consummate performer and American rebel. Updated with new research and interviews, unpublished photographs, and thoughtful comments from Pete Seeger himself, this is an inside history of the man Carl Sandburg called “America’s Tuning Fork.” In the only biography on Seeger, David Dunaway parts the curtains on his life. Who is this rail-thin, eighty-eight-year-old with the five-string banjo, whose performances have touched millions of people for more than seven decades? Bob Dylan called him a saint. Joan Baez said, “We all owe our careers to him.” But Seeger’s considerable musical achievements were overshadowed by political controversy when he became perhaps the most blacklisted performer in American history. He was investigated for sedition, harassed by the FBI and the CIA, picketed, and literally stoned by conservative groups. Still, he sang. Today, Seeger remains an icon of conscience and culture, and his classic antiwar songs, sung by Bruce Springsteen and millions of others, live again in the movement against foreign wars. His life holds lessons for surviving repressive times and for turning to music to change the world. “This biography is a beauty. It captures not only the life of the bard but the world of which he sings.” –Studs Terkel “A fine and meticulous biography . . . Dunaway has taken [Seeger’s] materials and woven them into a detailed, interesting, and well-written narrative of a most fascinating life.” –American Music “An extraordinary tale of an extraordinary man [that] will intrigue not only his legions of followers but everyone interested in one man’s battles and victories.” –Chicago Sun-Times From the Trade Paperback edition. 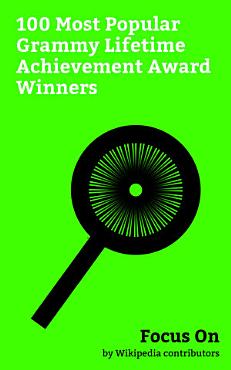 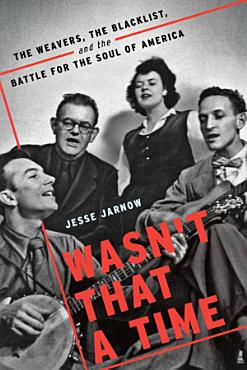 
The dramatic untold story of the Weavers, the hit-making folk-pop quartet destroyed with the aid of the United States government -- and who changed the world, anyway Following a series of top-ten hits that became instant American standards, the Weavers dissolved at the height of their fame. Wasn't That a Time: The Weavers, the Blacklist, and the Battle for the Soul of America details the remarkable rise of Pete Seeger's unlikely band of folk heroes, from basement hootenannies to the top of the charts, and the harassment campaign that brought them down. Exploring how a pop group's harmonies might be heard as a threat worthy of decades of investigation by the FBI, Wasn't That a Time turns the black-and-white 1950s into vivid color, using the Weavers to illuminate a dark and complex period of American history. With origins in the radical folk collective the Almanac Singers and the ambitious People's Songs, the singing activists in the Weavers set out to change the world with songs as their weapons, pioneering the use of music as a transformative political organizing tool. Using previously unseen journals and letters, unreleased recordings, once-secret government documents, and other archival research, Jesse Jarnow uncovers the immense hopes, incredible pressures, and daily struggles of the four distinct and often unharmonious personalities at the heart of the Weavers. In an era defined by a sharp political divide that feels all too familiar, the Weavers became heroes. With a class -- and race -- conscious global vision that now makes them seem like time travelers from the twenty-first century, the Weavers became a direct influence on a generation of musicians and listeners, teaching the power of eclectic songs and joyous, participatory harmonies. 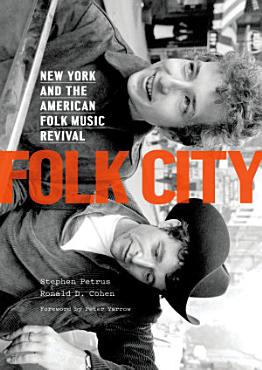 
From Washington Square Park and the Gaslight Cafe(c) to WNYC Radio and Folkways Records, New York City's cultural, artistic, and commercial assets helped to shape a distinctively urban breeding ground for the famous folk music revival of the 1950s and '60s. 'Folk City', by Stephen Petrus and Ronald Cohen, explores New York's central role in fueling the nationwide craze for folk music in postwar America. The musical form blossomed particularly in Greenwich Village, the famed neighborhood that had long nurtured unconventional art, progressive politics, and countercultural trends. But the phenomenon was not inevitable. After all, folk music was largely rural in origins, the songs of peasants in the Old World and then of sailors, cowboys, lumberjacks, coal miners, chain gangs, and others across the United States. How it became urban and modern is a fascinating story, one that involves the efforts of record company producers and executives, club owners, concert promoters, festival organizers, musicologists, agents and managers, editors and writers-not to mention the musicians and their audiences.0In this account, Petrus and Cohen capture the exuberance of the times and introduce readers to a host of characters who brought a new style to the biggest audience in the history of popular music. Among the savvy New York entrepreneurs committed to promoting folk music were Izzy Young of the Folklore Center, Mike Porco of Gerde's Folk City, and John Hammond of Columbia Records. While these and other businessmen developed commercial networks for musicians, the performance venues provided the artists spaces to test their mettle. The authors portray Village coffee houses not simply as lively venues but as incubators of a burgeoning counterculture, where artists from diverse backgrounds honed their performance techniques and challenged social convention in the era of Eisenhower, Kennedy, and Johnson. 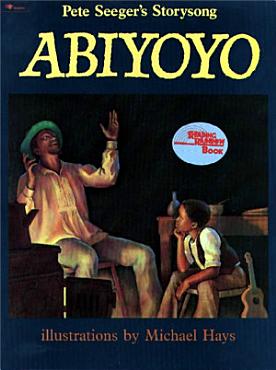 
Banished from the town for making mischief, a little boy and his father are welcomed back when they find a way to make the dreaded giant Abiyoyo disappear.


Based on a South African tale, this story tells what happens when a giant who had been banished from a town by a magician 30 years earlier is called back to save the town from flooding. 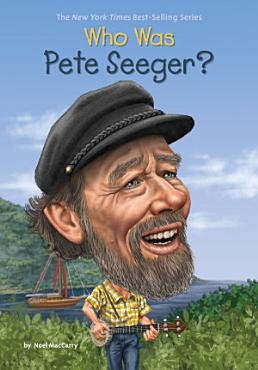 
Pete Seeger was an American folk musician and social activist whose outspoken songs about freedom and justice got him blacklisted from radio and TV for years. Pete Seeger was still singing and playing the banjo for tens of thousands of fans even when he was at the age of ninety-four. Born in New York City on May 3, 1919, Pete came from a family of musicians. Despite writing and singing folk songs that all of America knows, not many kids know his name. Why? Because his ties to the Communist Party got him banned from radio and television for many years! Well-known for his civil rights activism with Martin Luther King Jr., Seeger also spearheaded efforts that cleaned up the Hudson River and made it beautiful again. His best-known songs include "Where Have All the Flowers Gone?", "If I Had a Hammer" and "Turn, Turn, Turn." In this easy-to-read biography from the New York Times best-selling series, Pete Seeger is revealed as not just a performer but as a champion for a better world and the eighty illustrations contained in the book help bring his story to life. 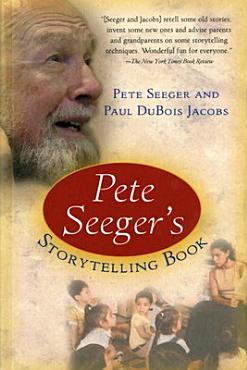 
The folksinger offers a guide to the art of storytelling, with new versions of familiar folktales, original stories, and tales based on songs, and family histories, along with suggestions for retelling and personalizing stories. 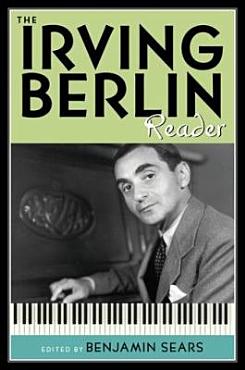 
The Irving Berlin Reader offers fascinating glimpses the life and work of this most famous of American songwriters. Berlin is presented here in full through writings from his earliest years to the present, including Berlin's own thoughts on songwriting. Many of the articles are otherwise difficult or impossible to find, and all are expertly contextualized by Ben Sears's introductions. 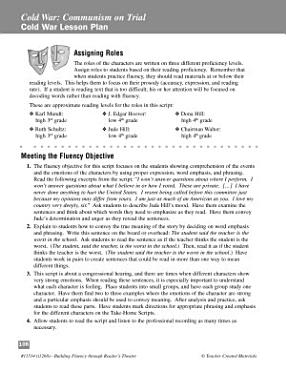 
This historical reader's theater script builds fluency through oral reading. The creative script captures students' interest, so they will want to practice and perform. Included is a fluency lesson and approximate reading levels for the script roles.