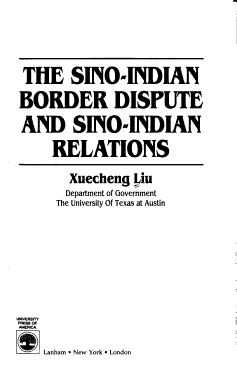 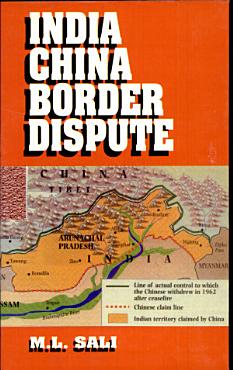 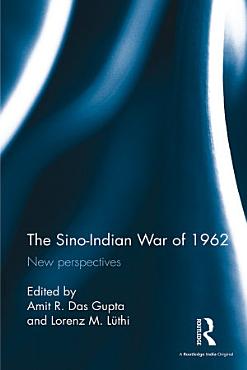 
The Sino-Indian border war of 1962 forms a major landmark in South Asian, Asian and Cold War history. Among others, it resulted in an unresolved conflict permanently hindering rapprochement between China and India, the establishment of the Sino-Pakistani axis, the deepening of the Sino-Soviet split and had a lasting impact on Indian domestic affairs. This volume draws on new documentary evidence to re-evaluate perceptions, motivations and decision-making processes of both antagonists, but also of third powers immediately affected by the conflict. It also investigates the effect on India’s internal politics, its Constitution, the Communist Party of India and the fate of Indians of Chinese origin. Finally, it analyses how the conflict is viewed in India today and its ramifications for India–China relationship. A major intervention in the Asian historical landscape, this book will be indispensable to scholars and researchers of modern history, especially of modern South Asia and China, international relations, defence and strategic studies, international politics and government. It will also be useful for think-tanks and government agencies. 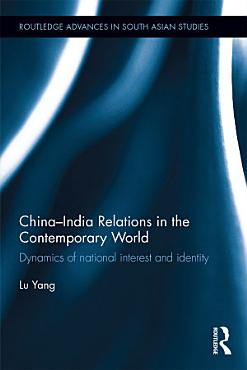 
As two Asian giants and rising power, the interactions between India and China have global significance. This book analyses the multifaceted and multi-layered character of Sino-Indian relations since the beginning of the 21st century in a period marked by cooperation and competition. Positioned in a social constructivist framework that emphasizes mutual perceptions and socialization, the book draws analytical leverage from two core concepts – national identity and national interest – to form the basis of the research inquiry. The author argues that the dynamics of national identity and national interest play an important role in determining their relations and shows how and why in the current international structure, including a context of accelerated globalization, their national identities as rising power and emerging power coupled with national interest of economic development have defined and directed their international positions and foreign policy-making. A unique approach to analysing Sino-Indian relations, this book is of interest to academics in the fields of Asian Politics and International Relations. 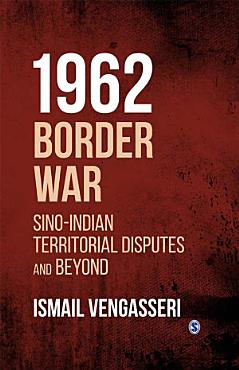 
1962 Border War: Sino-Indian Territorial Disputes and Beyond studies the historical antecedents of the origin and developments of the border dispute between the two Asian giants—India and China. It investigates why these newborn republics, despite their close ties in the international politics, chose a path of a large-scale military encounter in the winter of 1962. This book uses the classified Henderson Brooks-Bhagat Report and the CIA Staff Study Report to answer this question. The book debates how far internal bureaucratic hurdles, political intrigues and partisan interest in New Delhi have factored against Nehru’s China Policy. Further, this study reveals the impact of Cold War politics, CIA operations on the frontiers and the US strategy of projecting the Tibet factor on these two nations. The key significance of this study is that it reveals the historical factors behind the Sino-Indian frequent and ongoing skirmishes along the border. 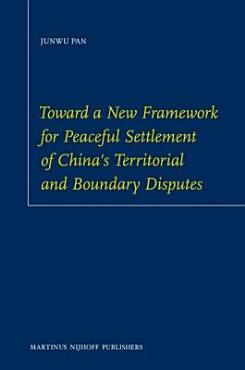 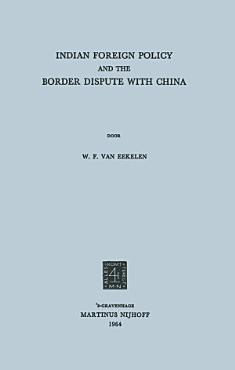 
The idea for a study of Indian foreign poliey originated during a diplomatie posting to New Delhi between 1957 and 1960. These years were marked by the eruption of the Tibetan revolt, the arrival of the Dalai Lama and the first ineidents along the Sino-Indian border. My departure eoineided precisely with the landing of the aireraft earrying Premier Chou En-lai to the meeting with the Indian Prime Minister whieh would terminate the preliminary phase of the boundary dispute. The eonfliet subsequently assumed proportions affeeting the entire position of India. It provided the most severe testing ground for of Peaeeful eoexistenee whieh India Panehsheel, the Five Principles advoeated as a new and Asian eontribution to international relations. The object of this book is to traee the five principles from their optimistic start in an atmosphere of friendship with China to their decline as an instrument of praetical polities. As Panehsheel experieneed both its rise and fall in the bilateral eontext of Sino-Indian relations, these will be examined in eonsiderable detail. Most emphasis is put on the border dispute whieh represented the first eonfliet between a eommu nist power and a non-aligned state. The analysis of legal aspeets and politieal motives in the dispute is preeeded by a lengthy ehronological deseription, whieh seemed neeessary not only to eomplete the aeeounts given in other publieations, but also as an illustration ofboth its climaetie development and the gradual inerease of Chinese pressure. 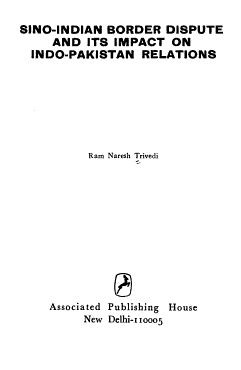 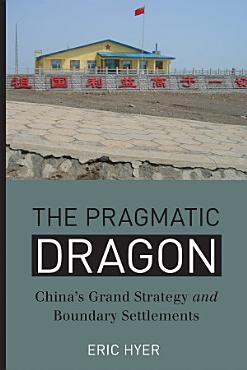 
China shares borders and asserts vast maritime claims with over a dozen countries, and it has had boundary disputes with nearly all of them. Yet in the 1960s, when tensions were escalating with the Soviet Union, India, and the United States, China moved to conclude boundary agreements with these neighbours peacefully. In this wide-ranging study of China’s boundary disputes and settlements, Eric Hyer finds China’s behaviour was strategic and even demonstrated willingness to compromise. This behaviour in earlier periods is pertinent to the ongoing territorial disputes in the East and South China Seas. The Pragmatic Dragon analyzes these disputes and the strategic rationale behind China’s behaviour, providing important insights into the foreign policy of a nation whose presence on the world stage continues to grow. 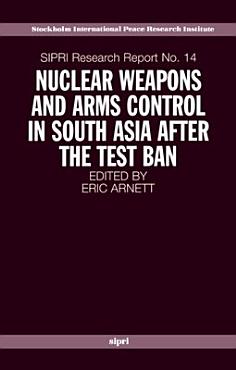 
As the nuclear weapon states continue to reduce their nuclear arsenals and international efforts to prevent the proliferation of nuclear weapons are reinvigorated, South Asia remains a unique region almost entirely unencumbered by nuclear arms control. Despite the recent popularity of the notion that nuclear deterrence is stabilizing the Indo-Pakistani conflict, there is good reason to believe that the risks of war and the use of nuclear weapons are not fully appreciated. Nevertheless, the prospects for negotiated measures to improve the situation are not good because of the domestic politics on both sides. Nuclear Weapons and Arms Control in South Asia after the Test Ban sheds new light on the risks of the current stand-off, the hidden costs of the nuclear options, and the domestic sources of the region's inertia, bringing together Indian, Pakistani and Chinese perspectives. 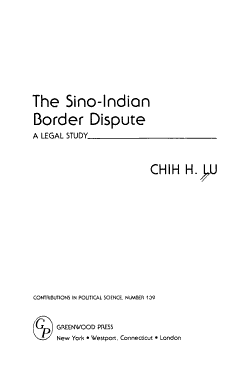 
This study explores the roots of the Sino-Indian border dispute and proposes a settlement that might be acceptable to both China and India. Lu provides the historical perspective necessary for a complete understanding of the problem, beginning with the seventh century, when China and Tibet first made contact. He argues that a settlement of the dispute is necessary not only for the peace of the Indian subcontinent but for other parts of the world as well. He explains why and how Great Britain came to be involved in Sino-Tibetan relations and pays particular attention to the failure of the Simla Conference of 1913-1914 between Britain, China, and Tibet to define a common boundary between China and India. The author explores Indian involvement in Sino-Tibetan relations and why India intervened against China's reoccupation of Tibet. He traces the border incidents and military clashes between China and India and the failure of the two powers to negotiate a settlement of their differences. Finally, he discusses the Sino-Indian border dispute from the perspectives of international law, effective occupation, and watershed. In conclusion, he offers some reasonable, practical measures based on international law and political reality that could be taken to settle the border dispute. 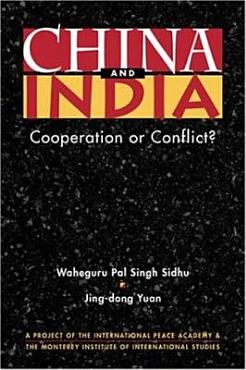 
The hardline view of Sino-Indian relations found in the published reports of Indian and Chinese security analysts is often at considerable odds with the more tempered opinions those same analysts express in private interviews and conversations. What is the reality of the increasingly important security relationship between the two countries? The authors of this new study address that question in depth. Sidhu and Yuan explore a range of key issues, including mutual distrust and misperception (perhaps the most important factor), the undemarcated border, the status of Tibet and Sikkim, trade, the tussle over various nonproliferation treaties, terrorism, the regional roles of the U.S. and Pakistan, and the impact of domestic public opinion and special interests. They do see a trend toward a more pragmatic approach in Beijing and New Delhi to managing differences and broadening the agenda of common interests. Nevertheless, they conclude, significant obstacles remain to the amicable relationship necessary for regional peace and stability, posing a daunting challenge to policymakers in these two rising powers.