Between 1609 and 1879, the geographical, political, and ideological status of the Kingdom of Ryukyu (modern Okinawa) was characterized by its ambiguity. It was subordinate to its larger neighbors, China and Japan, yet an integral part of neither. A Japanese invasion force from Satsuma had conquered the kingdom in 1609, resulting in its partial incorporation into Tokugawa Japan's bakuhan state. Given Ryukyu's long-standing ties with China and East Asian foreign relations following the rise of the Qing dynasty, however, the bakufu maintained only an indirect link with Ryukyu from the mid-seventeenth century onward. Thus Ryukyu was able to exist as a quasi-independent kingdom for more than two centuries-albeit amidst a complex web of trade and diplomatic agreements involving the bakufu, Satsuma, Fujian, and Beijing. During this time, Ryukyu's ambiguous position relative to China and Japan prompted its elites to fashion their own visions of Ryukyuan identity. Created in a dialogic relationship to both a Chinese and Japanese Other, these visions informed political programs intended to remake Ryukyu. In this innovative and provocative study, Gregory Smits explores early-modern perceptions of Ryukyu and their effect on its political culture and institutions. He describes the major historical circumstances that informed early-modern discourses of Ryukyuan identity and examines the strategies used by leading intellectual and political figures to fashion, promote, and implement their visions of Ryukyu. Early-modern visions of Ryukyu were based on Confucianism, Buddhism, and other ideologies of the time. Eventually one vision prevailed, becoming the theoretical basis of the early-modern state by the middle of the eighteenth century. Employing elements of Confucianism, the scholar and government official Sai On (1682-1761) argued that the kingdom's destiny lay primarily with Ryukyuans themselves and that moral parity with Japan and China was within its grasp. Despite Satsuma's control over its diplomatic and economic affairs, Sai envisioned Ryukyu as an ideal Confucian state with government and state rituals based on the Chinese model. In examining Sai's thought and political program, this volume sheds new light on Confucian praxis and, conversely, uncovers one variety of an East Asian prenational imagined political/cultural community. 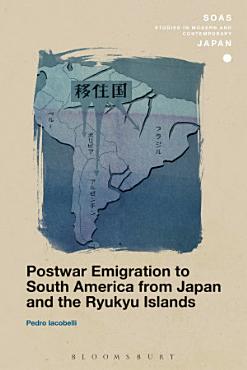 
Placing a distinct focus on the role of the sending state, this book examines the history of postwar Japan's migration policy, linking it to the larger question of statehood and nation-building in the postwar era. Pedro Iacobelli delves into the role of states in shaping migration flows by exploring the genesis of the state-led emigration from Japan and the US-administered Ryukyu Islands to South America in the mid-20th century. The study proposes an alternative political perspective on migration history to analyze the rationale and mechanisms behind the establishment of migration programs by the sending state. To develop this perspective, the book examines the state's emigration policies, their determinants and their execution for the Japanese and Okinawan migration programs to Bolivia in the 1950s. It argues that the post-war migration policies that established those migration flows were a result of the political cost-benefit calculations, rather than only economic factors, of the three governments involved. With its unique focus on the role of the sending state and the relationship between Japan, Okinawa and the United States, this is a valuable study for students and scholars of postwar Japan and migration history. 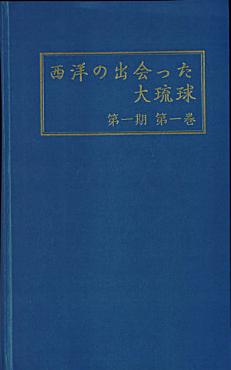 
This collection gathers all the primary texts, some rare or hitherto unpublished, written on Ryukyu by Western visitors, scholars, and missionaries from the 16th century to the eve of World War II. This first set of five volumes covers the period up to the arrival of Commodore Perry in 1854. It is of interest to historians and anthropologists, as well as to everyone who wants to understand the background of Okinawa's persistent distinctiveness and of its complex relations with the Japanese governments. 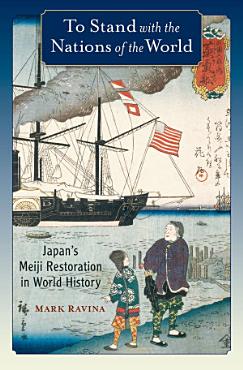 
The samurai radicals who overthrew the last shogun in 1868 promised to restore ancient and pure Japanese ways. Foreign observers were terrified that Japan would lapse into violent xenophobia. But the new Meiji government took an opposite course. It copied best practices from around the world, building a powerful and modern Japanese nation with the help of European and American advisors. While revering the Japanese past, the Meiji government boldly embraced the foreign and the new. What explains this paradox? How could Japan's 1868 revolution be both modern and traditional, both xenophobic and cosmopolitan? To Stand with the Nations of the World explains the paradox of the Restoration through the forces of globalization. The Meiji Restoration was part of the global "long nineteenth century" during which ambitious nation states like Japan, Britain, Germany, and the United States challenged the world's great multi-ethnic empires--Ottoman, Qing, Romanov, and Hapsburg. Japan's leaders wanted to celebrate Japanese uniqueness, but they also sought international recognition. Rather than simply mimic world powers like Britain, they sought to make Japan distinctly Japanese in the same way that Britain was distinctly British. Rather than sing "God Save the King," they created a Japanese national anthem with lyrics from ancient poetry, but Western-style music. The Restoration also resonated with Japan's ancient past. In the 600s and 700s, Japan was threatened by the Tang dynasty, a dynasty as powerful as the Roman empire. In order to resist the Tang, Japanese leaders borrowed Tang methods, building a centralized Japanese state on Tang models, and learning continental science and technology. As in the 1800s, Japan co-opted international norms while insisting on Japanese distinctiveness. When confronting globalization in 1800s, Japan looked back to that "ancient globalization" of the 600s and 700s. The ancient past was therefore not remote or distant, but immediate and vital. 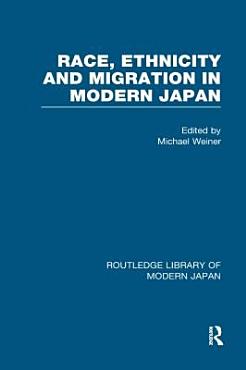 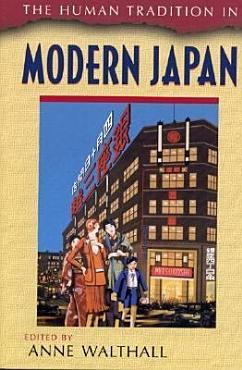 
The Human Tradition in Modern Japan is a collection of short biographies of ordinary Japanese men and women, most of them unknown outside their family and locality, whose lives collectively span the nineteenth and twentieth centuries. Their stories present a counterweight to the prevailing stereotypes, providing students with depictions of real people through the records they have left-records that detail experiences and aspirations. The Human Tradition in Modern Japan offers a human-scale perspective that focuses on individuals, reconstitutes the meaning of people's experiences as they lived through them, and puts a human face on history. It skillfully bridges the divides between the sexes, between the local and the national, and between rural and urban, as well as spanning crucial moments in the history of modern Japan. The Human Tradition in Modern Japan is an excellent resource for courses on Japanese history, East Asian history, and peoples and cultures of Japan. 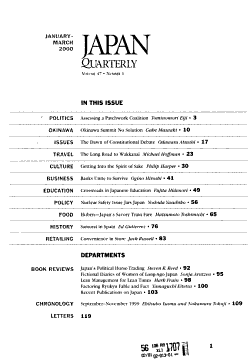 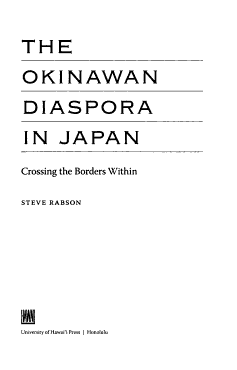 
This book is a very readable narrative history of Okinawans in Japan, the first English-language book to cover that territory. Based on interviews, memoirs and other literature, oral histories, and survey responses, and engaging with important elements of the huge body of Japanese scholarship on Okinawa, this book offers a historical narrative interwoven with first-person accounts either translated or collected by the author. 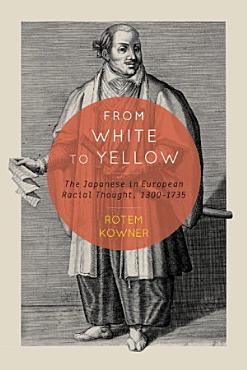 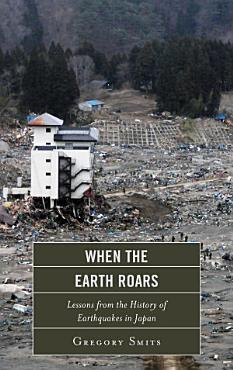 
Japan, which is among the most earthquake-prone regions in the world, has a long history of responding to seismic disasters. However, despite advances in earthquake-related safety technologies, the destructiveness of the magnitude 9 class earthquake and tsunami that struck the country on 3/11 raised profound questions about how societies can deal effectively with seismic hazards. This important book places the devastating earthquake, tsunami, and nuclear meltdown disaster in historical perspective, examining conceptions of earthquakes since the seventeenth century, the diverse ways actual earthquakes and their aftermath played out, and their enduring social and scientific significance. By looking backward, Gregory Smits identifies future pitfalls to avoid and assesses the allocation of resources for dealing with future earthquake and tsunami disasters. He criticizes Japan’s postwar quest for earthquake prediction and the concept of “characteristic” earthquakes. Smits argues that earthquakes are so chaotic as to be unpredictable, not only geologically but also in their social and cultural effects. Therefore, he contends, the best hope for future disaster mitigation is antiseismic engineering and flexible disaster-relief capabilities. As the first sustained historical analysis of destructive earthquakes and tsunamis, this book is an essential resource for anyone interested in Japan, natural disasters, seismology, and environmental history. 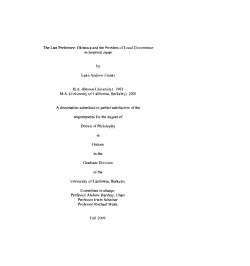 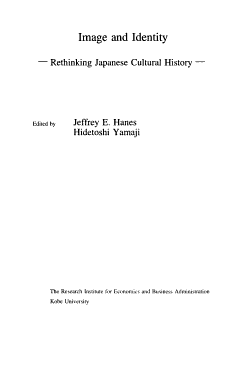